[ puh-lit-ik-lee kuh-rekt ]
/ pəˈlɪt ɪk li kəˈrɛkt /
Save This Word!
See synonyms for: politically correct / political correctness on Thesaurus.com
This shows grade level based on the word's complexity.
adjective
marked by or adhering to a typically progressive orthodoxy on issues involving especially ethnicity, gender, sexual orientation, or ecology: The actor’s comment about unattractive women was not politically correct.The CEO feels that people who care about being politically correct are overly sensitive.Abbreviations: PC, P.C.
QUIZ
QUIZ YOURSELF ON “ITS” VS. “IT’S”!
Apostrophes can be tricky; prove you know the difference between "it’s" and "its" in this crafty quiz!
Question 1 of 8
On the farm, the feed for chicks is significantly different from the roosters’; ______ not even comparable.
it's
its
TAKE THE QUIZ TO FIND OUT

Since entering English in the late 1700s, the term politically correct has undergone several shifts in meaning. Originally, the term was used to describe something that was in accordance with established political, legal, or social norms or conventions. The 1870s saw the introduction of the opposite term, politically incorrect , a useful addition to the language, considering how commonly politically correct was and still is used in negative constructions.
Somewhat grimly, in the 1920s the Soviet Communist Party began using the concept of political correctness to enforce strict adherence to the party line in all aspects of life. It you were unfortunate enough to be deemed politically incorrect , you were likely to be exiled to a gulag, or worse.
Today the term politically correct (and its abbreviation PC ), more often than not, refers specifically to the language that surrounds controversial or hot-button issues. Liberals have used the negative construction not politically correct to draw attention to words, phrases, or statements that they felt were socially unacceptable or insensitive. The conservative response to this has been to question and generally reject the notion of political correctness , arguing that it too often entails “the policing of language.” As a result, critics of the term politically correct often use it to modify nouns such as “euphemism,” “nonsense,” “hogwash,” and “propaganda.”

OTHER WORDS FROM politically correct

What does politically correct mean?

Being politically correct, or PC for short, is saying or doing things in ways that will not cause offense regarding race, ethnicity, gender, sexual orientation, and other aspects of identity.

Some people criticize PC culture as being too sensitive and fragile.

How is politically correct pronounced?

What are other forms of politically correct?

What are some other words related to politically correct?

Where does politically correct come from?

According to professor Angelo Codevilla, the concept of politically correct has its roots in 1930s communist Russia, although the actual phrase can be found all the way back in the 1790s.

The concept came into being, Codevilla explains in a 2016 article, as a “semi-humorous reminder that the Party’s interest is to be treated as a reality that ranks above reality itself.” To better explain the meaning, Codevilla uses the following joke:

Comrade, your statement is factually incorrect.
Yes, it is. But it is politically correct.

In short, political correctness in 1930s Russia was agreeing with the government no matter what, in the interest of self-preservation.

The term made its way to America during the 1940s, according to scholar Herbert Kohl, where it began to be used by Jewish socialists to scorn Jewish members of the United States Communist Party who continued to support the Russian Communist Party even after it agreed to the German-Soviet Non-Aggression Pact of 1939. The thinking was that Jews who continued to support the Soviets after the agreement with the Nazis were betraying European Jewry.

As Kohl puts it, the term “was meant to separate out Socialists who believed in equalitarian moral ideas from dogmatic Communists who would advocate and defend party positions regardless of their moral substance.”

While political correctness appeared every so often following the end of World War II, the term didn’t really hit the American mainstream until the 1990s. Many writers at the time examined progressive culture at universities such as Berkeley and Harvard where, as New York Times reporter Richard Bernstein put it, there existed an “unofficial ideology” consisting of a “cluster of opinions about race, ecology, feminism, culture and foreign policy” that are defined as being the “‘correct’ attitude toward the problems of the world.”

And the December 1990 issue of Newsweek, which contained an article about political correctness, carried the title THOUGHT POLICE on the front cover. This refers to how people would be corrected for saying politically incorrect things (e.g., blind corrected to visually impaired or Black to African American). 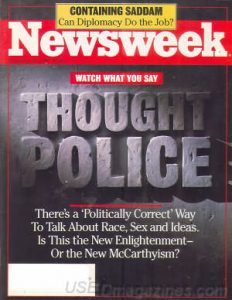 The term received a lot of attention during the run up to the 2016 election, with Donald Trump notorious for saying things that many conventional politicians wouldn’t. As Trump put it in the first Republican debate: “I think the big problem this country has is being politically correct.”

At a campaign rally in South Carolina, for instance, Trump called for a “total and complete shutdown of Muslims entering the United States.” Many people on the left saw these comments as racist and xenophobic, while members of the right called those labeling it this way “too politically correct.”

How is politically correct used in real life?

The term political correctness is widespread, especially when discussed in light of the so-called culture wars. Some topics in the 2010s included whether Confederate monuments in the American South should be removed, whether NFL players should be allowed to kneel during the national anthem, and even the 2018 redesign of the Barnum’s Animals crackers box so that the animals were not caged.

Stop political correctness in our schools. Of course Texas schoolchildren should be taught that Alamo defenders were ‘Heroic’! I fully expect the State Board of Education to agree. Contact your SBOE Member to complain. ⁦@TXSBOE⁩ #txlege #tcot https://t.co/Ph9oBoBzKF

@MikeDiaz285 @SoBeCruzGirl @NARDDAWG_JG#FlashbackFriday The @dallascowboys helmet decal supporting police officers after the shooting of 16 Dallas PD officers, with 5 killed, that was banned by the @NFL in the name of political correctness. pic.twitter.com/qw2pxakuxu

There are also discussions on news programs debating the concept of PC culture itself and its place in society.

Dr Kevin Donnelly, @ESIaustralia, has argued against the danger of political correctness in the Australian school system.

Political correctness is often criticized for being taken to the extreme (e.g., using the phrase vertically challenged for short).

“As a protest, people have begun purposely engaging in what is referred to as “anti-political correctness culture,” referring to the language that is used to typically be respectful and inoffensive.”

How to use politically correct in a sentence

Other Idioms and Phrases with politically correct

Also, PC or p.c. Showing an effort to make broad social and political changes to redress injustices caused by prejudice. It often involves changing or avoiding language that might offend anyone, especially with respect to gender, race, or ethnic background. For example, Editors of major papers have sent out numerous directives concerning politically correct language. This expression was born in the late 1900s, and excesses in trying to conform to its philosophy gave rise to humorous parodies.