Everything After Z by Dictionary.com
Previous Word AFC
Next Word AMOG

What does AFK mean?

Frequently found in chat rooms of massively multiplayer online games (MMOG), AFK is short for away from keys ... for when you aren't actively on a computer.

Going afk from here on out in observance of #YomKippur. See you guys tomorrow night. ✌️✡️
@IntelCrab, September, 2018
Wow 50million... and I keep getting put with the same afk and cant be bothered to play im just trading players, thanks a lot Rocket League 😂
@CROWY74, September, 2018
& here is how I won: Heal & loot outside of Playzone until 5th circle starts closing in. Get to middle building with vehicle. Go AFK until white circle wants you to move. Smoke your way out of the building. Go prone, find cover & wait for right moment. Kill 2 out of 3 enemies.
@the4valanche, September, 2018
SEE MORE EXAMPLES

Where does AFK come from? 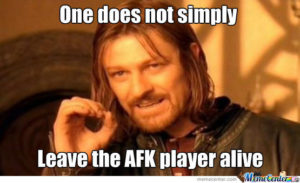 AFK, frequently written as the lowercase afk, can be found as early as 1989 when the online newsletter Fidonet listed it along with a few other old-school internet acronyms such as brb and lol.

Back then, AFK was used in IRC (Internet Relay Chat), an early application for online chatting. People would use the acronym so that others would know why they weren’t responding to messages: They were away from their computer keyboard, or keys.

With the rise of MMOGs in the 1990s, members of the gaming community began using AFK in in-game chat rooms for players who were idling. 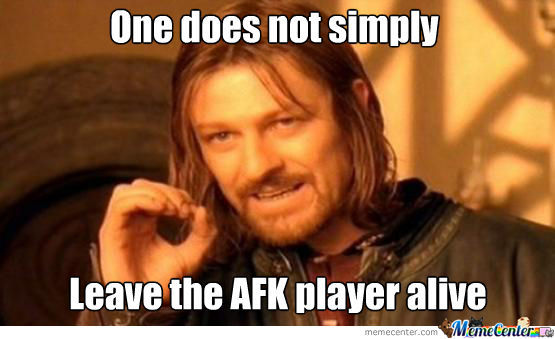 AFK is mostly used in contexts where there is instant communication, such as in chat rooms, texting, and online gaming. While less common, it does appear on social media, although typically in a gaming-related post. AFK is often used as a modifying phrase (going or being AFK). People who are habitually AFK may be referred to as AFKs.

I'm going AFK for the rest of the night.

I placed gold in my first season then peaked plat 1 promo then back to back plat 5 finish. This season I have just been demoted to silver 2 and I'm dropping bombs almost every game. I can't even blame trolls or people afk that's the worst part 😭😭😭😭 #elohell pic.twitter.com/tTwkdtxqvY

This is not meant to be a formal definition of AFK like most terms we define on Dictionary.com, but is rather an informal word summary that hopefully touches upon the key aspects of the meaning and usage of AFK that will help our users expand their word mastery.