What does coda mean?

The word coda, or CODA, is an acronym that stands for child of deaf adult(s). Coda is typically used to specifically refer to a hearing person who has a deaf parent or parents or a deaf guardian or guardians.

It does not necessarily refer to a young person—the word child is used to indicate the family relationship, as opposed to the age. (The acronym koda, for kid of deaf adult(s), is sometimes used to distinguish such a person as being under 18.)

The term child of deaf adult(s) uses the word deaf in a general way to mean completely or partially without the sense of hearing. In other contexts, the capitalized form Deaf is typically used in terms referring to the culture or community of deaf people—and sometimes even more specifically to refer to those who use American Sign Language (ASL) as a primary means of communication. However, some may use the capitalized form Deaf in all cases, including when spelling out the meaning of the acronym CODA.

Coda is pronounced as a word and not as individual letters (that is, not like C-O-D-A). It’s typically used as a noun to refer to such a person, as in As codas, we have a unique connection to the Deaf community. Coda can also be used as an adjective, as in coda culture or CODA organizations.

The word coda is most often used by children of deaf adults themselves, as a way to self-identify, as well as by organizations composed of such members. However, it is also used by others outside of these communities and organizations.

Example: I’m a coda, so keep in mind that ASL is my first language.

Where does coda come from? 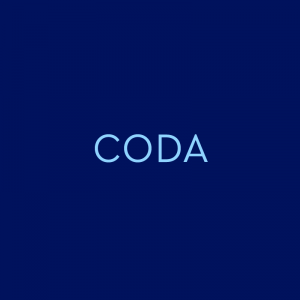 The term coda was coined in 1983 by Millie Brother, a child of deaf parents, in the process of founding the support organization Children of Deaf Adults International (CODA International).

The large majority (around 90 percent) of children born to deaf parents are hearing children. For many of these people, the word coda serves as a useful identifier that helps to bring visibility to their unique experiences, which include navigating the cultures and communities of both deaf and hearing people. For example, many codas use sign language as a first language, and many codas often act as an interpreter for their parents or guardians. Many codas also report experiencing common challenges, including as part of these interpretation responsibilities or from feeling a sense of isolation from being “between” two worlds.

Due to their unique situation, codas are also often of significant interest to researchers in various fields, including linguistics, genetics, and psychology.

The award-winning 2021 film CODA, about a woman’s relationship with her deaf family members, further increased mainstream awareness of the term.

CODA means child of Deaf adult. All 4 of my kids are CODAs but in my house, Mom does all the talking..hehe.
@MarleeMatlin, September 2, 2009
The independent film is a fast-paced, genre-bending romp, shot on three continents with a cast made up entirely of deaf actors and CODAs (meaning children of deaf adults).
Coby McDonald, Pacific Standard, April 10, 2018

The term coda is most likely to be used by codas themselves or by people who are familiar with sign language or the Deaf community.

As someone who grew up in the deaf community with deaf parents, the Software TDD feature in iOS 10 is a game-changer for deaf ppl & CODAs.

What a documentary. As a Deaf person I always thought I understood how the CODAs felt growing up but I didn't know the half of it. So much depth. Almost shed a tear! #MotherFatherDeaf

One really good thing from all of this: the number of new resources for #Deaf children is growing day by day. Many have been made by Deaf adults & CODAs modelling high expectations & language skills. They will be invaluable for years to come.

A group of CODAs, Child of Deaf Adults, and their families reflect on a special screening of the film CODA, now available in select theaters and streaming on Apple TV+ #CODAfilm https://t.co/ktPucJiTdz pic.twitter.com/SNlqi7muib

This is not meant to be a formal definition of coda like most terms we define on Dictionary.com, but is rather an informal word summary that hopefully touches upon the key aspects of the meaning and usage of coda that will help our users expand their word mastery.