What does DTF mean?

DTF is an initialism standing for down to fuck, meaning that someone is willing to engage in a short-term sexual relationship.

Where does DTF come from? 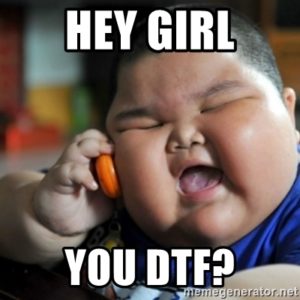 Down in this context refers to willingness, as in “I’m down (to do something)” a use which originated in the 1950s. Someone who is DTF, therefore, is willing to have sex, or more vulgarly, fuck. Often, being DTF signifies someone is not necessarily interested in a long-term romantic relationship.

Green’s Dictionary of Slang suggests that DTF originated in the 2000s, and the slang website Urban Dictionary’s first definition comes from 2002. It’s possible that the rise of the initialism is linked to texting and internet slang, which contains many other shortened versions of pre-existing phrases.

Predating the viral acronym, down to fuck appears in the 1998 song “Still Not A Player” by Big Pun (“Who’s down to fuck tonight?”) and in the 2001 Crazy Town song “Revolving Door” (“But don’t waste my time / Unless you’re down to fuck.”)

any ghosts dtf? lookin to find me a good spirit who's up for some fun
@luvergrrrl, May 9, 2017 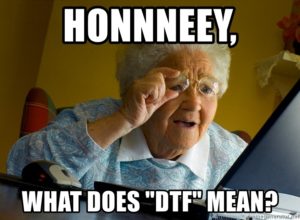 DTF often used in isolation on dating profiles or social media hashtags to signify that someone is interested in a casual relationship.

Parodies of DTF juxtaposing the term’s racy origins against more mundane interpretation are now frequently used for humorous effect, such as Down to fish.

This is not meant to be a formal definition of DTF like most terms we define on Dictionary.com, but is rather an informal word summary that hopefully touches upon the key aspects of the meaning and usage of DTF that will help our users expand their word mastery.