or Men Going Their Own Way or VGTOW

What does MGTOW mean?

MGTOW is an acronym for Men Going Their Own Way, an online social movement and backlash to feminism where men renounce interactions with women and seek to define and live out their masculinity on their own terms.

Where does MGTOW come from? 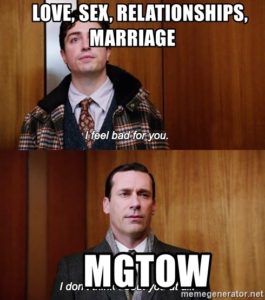 MGTOW, an outgrowth of Men’s Rights Activism (MRA) and the Men’s Rights Movement (MRM), is an online movement that rejects social constructions and expectations of masculinity, especially feminist ones. These men seek to define themselves as men on their own terms—to go their own way. They deny the historic oppression of women in society and believe instead that it’s women, particularly since the rise of modern feminism, who have oppressed men. For this position, MGTOW followers claim “double standards” such as bias toward women in custody battles and false accusations of rape.

And so many followers of MGTOW seek to eliminate interactions with women from their lives, including romantic relationships and marriage, out of a sexist belief that male/female interactions only result in women abusing men, taking their money, and so on. 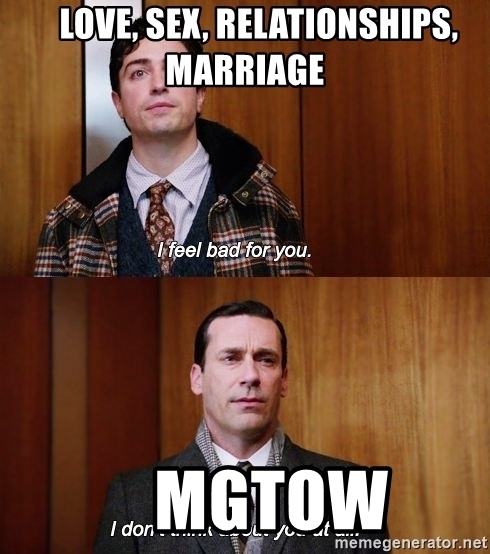 While those who identify as MRA believe they can actively combat “male oppression,” the MGTOW instead focuses on independence and self-preservation. MGTOW ideology argues that their philosophy is not anti-female, per se, but simply a way for men to reclaim self-ownership against an oppressive anti-male system, and that excluding women from a man’s life allows him decide his own destiny.

The MGTOW movement was formed in the early 2000s in the online manosphere by a group of posters on the XYZ forum, an MRA message board. Disliking the “PC culture” these posters began the MGTOW movement as their own backlash to what they perceive as an anti-male society. The formal foundation of MGTOW was laid during an in-person meeting between users Meiko and Ragnar in Hickory, North Carolina in October of 2004, with the latter writing the MGTOW manifesto. At the beginning, the “marriage strike”—wherein men “resist” the institution of marriage, which they believe to be oppressive—was not part of MGTOW doctrine, though it has since become one of its defining factors.

Because one of the original frustrations of the MGTOW founders was that women were allowed to participate in MRA communities, the involvement of women in MGTOW groups is forbidden. Also, being a MGTOW is not something that can be self-proclaimed and usually necessitates moving through four stages. These levels begin with “situational awareness,” progresses to rejection of long-term relationships with women, then on to a rejection of even casual hookups. Level three sees members strive to only make as much money as necessary (“economic disengagement”), and finally, on the fourth level, they reject society altogether. 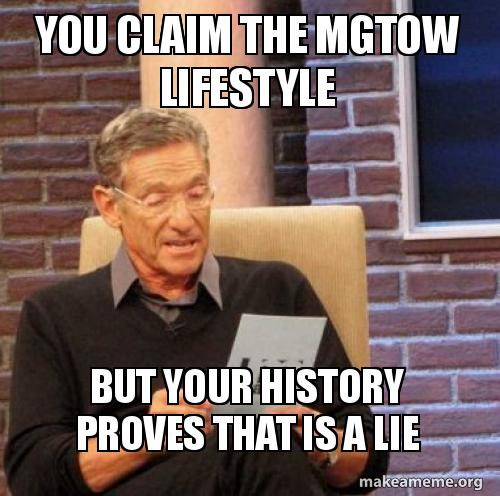 MGTOW is when you're tryna date qts but you go hollow
@zenbuddhistdog, March, 2017
Inspired by a post on GamerGhazi highlighting some terrible MGTOW graphics, I went and took a look in the archives of MGTOW.com, and found a bunch that were even more terrible, including the one above. Let me ease you into the terribleness, starting with some whiny, self-pitying fat-shaming.
David Futrelle, We Hunted the Mammoth, October, 2015
They are called Men Going Their Own Way (or MGTOW, pronounced 'mig-tow') and they have a serious problem with feminism. To them, the feminist movement has all but ruined our society, and it just doesn't make sense to participate in the dating game because women have been, in their eyes, programmed to ruin a man's life.
Mack Lamoureux, Vice, September, 2015
SEE MORE EXAMPLES

When referring to the MGTOW movement, it is often pronounced “Mig-Tow,” vs. pronouncing letter-by-letter.

Though the MGTOW movement claims to be for equality and argues that it is not actually anti-female so much as it is anti-male oppression, lots of evidence from the MGTOW website has led observers to conclude that the movement is profoundly misogynistic. For example, MGTOW groups have circulated online memes with such statements as “Why do women spend so long on their appearance? Because it’s all they have to offer.” This claim is followed by a list of grievances such as venereal diseases, alimony, and gossip.

This is not meant to be a formal definition of MGTOW like most terms we define on Dictionary.com, but is rather an informal word summary that hopefully touches upon the key aspects of the meaning and usage of MGTOW that will help our users expand their word mastery.