What does pawg mean?

Pawg stands for phat ass white girl. In this context, phat is an alternative slang spelling for fat. A pawg is a woman who has a big—though it’s not necessarily fat—butt.

Where does pawg come from? 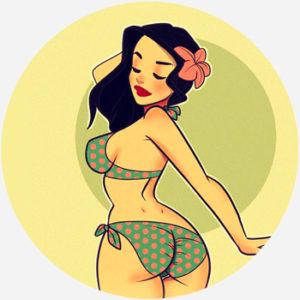 It’s not known when exactly pawg showed up in the English language, though it has existed since at least the early 2000s. The first Urban Dictionary entry for pawg is dated July 29, 2004. Another entry was created on April 11, 2005 with almost identical content. Phat is a word finds its roots in African American slang, and so it makes sense that it would be included in the spelled-out version of pawg because the latter has similar origins.

The word pawg began to gain more attention around the end of 2010 and the beginning of 2011. Since then, pawg has been a popular hashtag on tweets advertising sexual services or imagery.

“Just remembered the #Pawg that ditched me smacked my ass. What is the world coming to...Pawgs are smacking black guys on the ass now? Wow”
@chakapaul Twitter (April 22, 2017)
“This is what you consider to be a PAWG? No wonder you told me you can walk the streets of downtown Philadelphia and see white girls with phat asses all over the place, no wonder all you guys were telling me there's white girls with PHAT asses all over Europe, it all makes sense now. People need to learn the difference between FAT and PHAT.”
Ass Destroyer Adultdvdtalk (June 28, 2014)
“PAWGs aren't fat - they're phat. Bubble booties like black or Latina gals.”
SifuPhil City-data (November 4, 2010)
SEE MORE EXAMPLES

All of that said, it’s probably not a good idea to refer to a woman as a pawg without her consent, as it might come off as being fetishizing.

This is not meant to be a formal definition of pawg like most terms we define on Dictionary.com, but is rather an informal word summary that hopefully touches upon the key aspects of the meaning and usage of pawg that will help our users expand their word mastery.