What does SWERF mean?

SWERF is an acronym standing for Sex Worker-Exclusionary Radical Feminist, a label for a woman who supports mainstream feminism but opposes sex work, believing it is ultimately oppressive.

Where does SWERF come from? 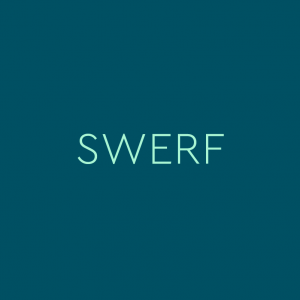 SWERF is as a sister term to TERF, or Trans-Exclusionary Radical Feminist, a term coined by Viv Smythe in 2008 for feminists who exclude transgender women from their interpretation of feminism out of belief that they aren’t women, or that they reinforce sexist, binary roles.

SWERF emerges online by 2013, notably used on a site, Everyday Whorephobia, which addresses challenges sex workers face. It stands for Sex Worker-Exclusionary Radical Feminist. A SWERF is said to support the empowering aims of radical feminism, but they don’t extend their support to sex workers, believing sex work, including pornography and prostitution, inevitably objectifies and oppresses women.

#SWERF & #TERF define those who insult, stigmatize, & silence SWs & Trans*people by REDUCING THESE TO outcomes of oppression @Glosswitch

The term spiked in 2018 with the passage of US House and Senate bills, known as FOSTA-SESTA, or Fight Online Sex Trafficking Act–Stop Enabling Sex Traffickers Act. The laws were intended to cut down on sex and human trafficking online, but many consensual sex workers have said it has hurt their ability to earn income, and safely, on sites like Craigslist.

Women who supported FOSTA-SESTA were sometimes labeled SWERFs, and their critics maintain that doing consensual sex work is a choice women have a right to make. 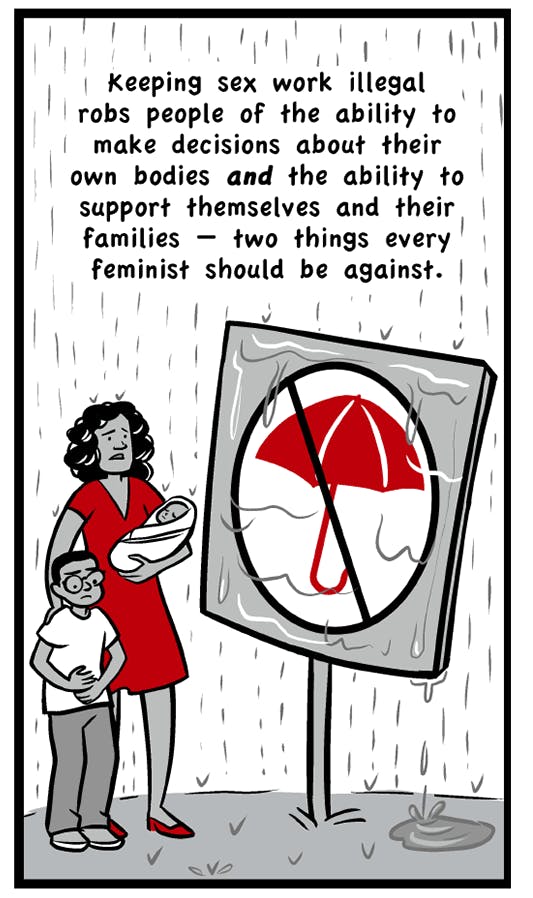 ...shoutout to bi sex workers (if ur a swerf gtfo) your body is yours to do with as you please and i hope youre always safe. ur valid and i love u
@openpitbbq, January 2019 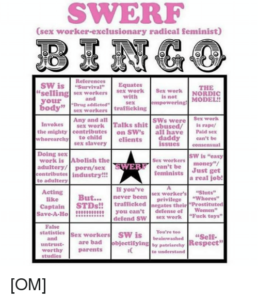 misandry-mermaid / Tumblr
SWERFs pride themselves on the belief that sex work is inherently wrong because it enables the patriarchy. Therefore, they argue, sex work cannot be divorced from women being objectified by men. Most act as if they personally know what is best for sex workers, even though many (albeit, not all) SWERFs have zero experience with sex work themselves.
Ana Valens, The Daily Dot, April 2018
SEE MORE EXAMPLES

SWERF is used in third-wave feminist discourse, and it often appears alongside its sister term, TERF.

Many TERFs are also sex worker exclusionary as well (SWERF). Trans people and sex workers have common enemies in the bid to try and fight for our rights. We represent trans sex workers and will also stand by trans people. https://t.co/rAOqlHvefN

People generally use the term as a pejorative against feminists who oppose sex work, denouncing them as hypocritical and counterproductive to the larger project of women’s empowerment.

Nina Vallins is also a swerf; her words to that effect appear in a monthly article if you search her name. So trash, basically

There’s also lots of crossover between those who might be considered SWERFs and those considered TERFs.

They may call themselves sex worker/prostitution abolitionists, believing the practices will ultimately lead to the abuse, violence, and subjugation of women by men.

This is not meant to be a formal definition of SWERF like most terms we define on Dictionary.com, but is rather an informal word summary that hopefully touches upon the key aspects of the meaning and usage of SWERF that will help our users expand their word mastery.