What does wyd mean?

Wyd is a texting and internet acronym that stands for What (are) you doing? or What (would) you do?

Where does wyd come from? 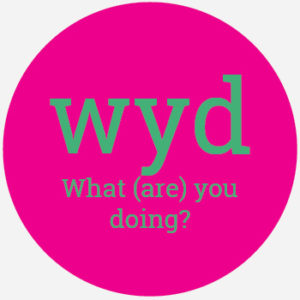 Wyd is a text-speak abbreviation. For “What (are) you doing?” It was first defined on Urban Dictionary on 2009.

Wyd can be a literal question meant to find out what another person is actually up to. It can also texted as an informal greeting like What’s up?

Wyd, like the phrase it abbreviates, also acts a rhetorical question used to challenge or question someone’s lifestyle or choices. For instance, one might ask: “If you don’t support your best friend when she’s sad then wyd?”

Several memes have incorporated wyd. One is the After Smoking This meme, which became popular in early 2017. This features a picture of an outlandish amount of drugs, such as a very large joint, along with the caption: “WYD [What are you doing] after smoking this?” A second image follows, depicting someone as if they outrageously high.

Another meme, which makes a slightly different use of wyd, is the Your Girl meme, which commonly takes two forms. The first, accompanied by a picture of a very muscular man, poses the scenario: “You’re in a club and this dude slaps your girl’s ass. What do you do?” The hypothetical question is sometimes abbreviated as wyd. The second is similarly structured but presents a boyfriend with an allegedly tempting opportunity to cheat on his girlfriend.

These uses of wyd may have helped it reach a wider audience.

“sooo when y'all humans gone get a personality stop asking wyd every 3 minutes of y'all life? asking for a friend....”
@ktha_g Twitter (May 1, 2017)
“if she's your girl and you don't show her off like wyd.... ”
Brennen Taylor Facebook (February 22, 2016)
“While it's not brand new, the WYD after smoking this meme has hit its peak on Thursday thanks to the unofficial marijuana holiday 420.”
“16 ‘WYD After Smoking This’ memes that will leave you giggling,” Fractt.com (April 20, 2017)
SEE MORE EXAMPLES

A less common variant of wyd is wud, whose u stands for you in text-speak.

The informal conversational opener wyd is often associated with fuckboys, a slang term for men known for being annoying and pervasive in their pursuit of women, usually for sex. Fuckboys are sometimes stereotyped as texting wyd? as a late-night booty call.

WYD can also stand for World Youth Day, a global event held every three years by the Catholic Church.

This is not meant to be a formal definition of wyd like most terms we define on Dictionary.com, but is rather an informal word summary that hopefully touches upon the key aspects of the meaning and usage of wyd that will help our users expand their word mastery.