What does ⚓ Anchor emoji mean?

Ahoy, mate! The anchor emoji uses a classic representation of an anchor, employing something called the “admiralty pattern,” the oldest, traditional version of a modern anchor.

A ring sits at the top of a central shank, and at the other end two arms curve up with pointed flukes that dig into the seabed.

A popular tattoo, the symbol represents things related to marine life, such as sailing, being in the navy, or working on a boat as a fisherman. It is also used in social media to reference stability and strength.

Where does ⚓️ Anchor emoji come from? 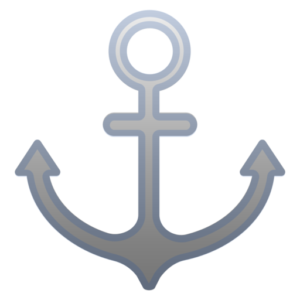 An anchor is a large, extremely heavy metal device, dropped with the use of chains over the side of boats to keep them in one place, or “anchored,” when they are in the water. The anchor emoji depicts just that and was approved as part of Unicode 4.1 in 2005 and added to Emoji 1.0 in 2015.

The origin of the anchor itself started with heavy rocks, logs, and even sacks of sand tied to a long rope. The anchor evolved with the Iron Age, which is a good thing since a sack of sand doesn’t make for a great tattoo.

The anchor has become a popular symbol for all things maritime related, and it was once so popular with naval sailors around the world that it became something of a cliche.

Do you remember the Popeye cartoon character? One of his most prominent features was his anchor tattoo atop his bulging forearm (after eating his spinach, of course). Representing maritime activities of all kinds, the anchor emoji, just like the symbol itself, does double duty to represent something or someone solid, stable, and reliable in life.

#Reserved for Sailors#⚓ Life at Shore after Sea#💪

A beautiful morning on the Trent and Mersey pic.twitter.com/n1jAT1ZqKr

When your team is named The Mariners, it of course makes sense to use this emoji! Waiting a few years on the tattoos might be a good idea, however.

Proud of this team! Sealing a successive victory with players missing! Four unbeaten for @AmbleEEJuniors Under 7s ahead of the league opener next weekend!

Special mention to young Jay who scored 5 tonight taking his goal tally to 20 in pre-season! 👏🔥

Up The Mariners! ⚽️⚓ pic.twitter.com/WXBhFFtWWL

We're so excited – we won 2 awards last night at the Foundation for Fraternal Excellence Awards Banquet! These programs flourish because of YOU ⚓😊

1. Best Campaign in Support of an Outside Philanthropy for Chapter Giving
2. Best Use of a Foundation Grant for Hope Serving pic.twitter.com/DKeh2KFEJt

Austin Crowley is the first @vandymbb commit for 2019 Class. He is a 4 star recruit ranked 64th best player by 247Sports. #AnchorDown ⚓⬇️ pic.twitter.com/ddpeX91roo

This is not meant to be a formal definition of ⚓️ Anchor emoji like most terms we define on Dictionary.com, but is rather an informal word summary that hopefully touches upon the key aspects of the meaning and usage of ⚓️ Anchor emoji that will help our users expand their word mastery.