What does 👶 Baby emoji mean?

The baby emoji means someone is expecting a baby, just had a baby, has a cute baby picture to share, or is up all night caring for the crying little son of a … uh … perfect little angel. It can also be used in place of baby as a term of endearment for your  bae.

Conversely, it is sometimes used as an insult when it signifies someone who is being childish or acting like a baby.

Where does 👶 Baby emoji come from? 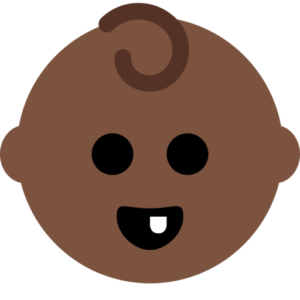 The baby emoji shows a bright yellow baby face staring at you with wide eyes from under a single curl of hair. Samsung and Microsoft where nice enough to give their versions of the baby emoji a pacifier, while on Twitter and Facebook a single tooth indicates this emoji is teething … be prepared for some wailing.

This yellow version was added to the Unicode Consortium in 2010. Five years later, the people and smileys category was updated to reflect the world’s racial diversity. Now the baby emoji now comes in a range of skin tones.

Just like some pampers you on that childish shit 👶
@daddy_dave21, May, 2015
👶It is a BOY!! 👶. Welcoming Colton to the world ❤️ Born: Tuesday September 25 at 1:44pm, 9lbs 7oz
@Kayla_Brooker, September, 2018
Soaps on, red hot bubble bath, fresh jamas for us both wait for our food, cosy night in with my baby 👶Nando’s delivery is life
@HUSTLERbabySJW, September, 2018
SEE MORE EXAMPLES

Predictably, the baby emoji is mostly commonly seen in posts about babies. These posts include pregnancy announcements, pictures of newborn or young children, or announcements of the baby’s sex.

In fact, in 2017 rap artist Nicki Minaj set off a Twitter firestorm when she tweeted a single baby emoji and nothing else. It started intense speculation about what it could possibly mean. Was she pregnant?!?!?!?! She never explained …

When some people say “my baby,” they mean the furry four-legged variety. Pet owners use the baby emoji to show the world their canine companion or feline friend is one of the family.

On Snapchat, however, it has a very specific meaning. It is placed next to a contact to indicate you are new friends.

While the most common uses of this emoji are adorable and loving, it has a very different meaning when used as an insult to mean someone is being childish or foolish.

Critics of President Trump use the baby emoji plus the orange emoji as a nickname meant to insult both his skin tone and his behavior.

This is not meant to be a formal definition of 👶 Baby emoji like most terms we define on Dictionary.com, but is rather an informal word summary that hopefully touches upon the key aspects of the meaning and usage of 👶 Baby emoji that will help our users expand their word mastery.