What does 🏹 Bow and Arrow emoji mean?

Been struck by Cupid’s arrow? Or, feeling like robbing from the rich to give to the poor? Time to get out the bow and arrow emoji 🏹.

Most literally, the bow and arrow emoji represents the sport of archery, so it’s often used in the metaphor “on target.” It can indicate someone is experiencing those tingles and sparkles of love. It’s also associated with the zodiac sign of Sagittarius, depicted as a mythic archer.

Where does 🏹 Bow and Arrow emoji come from? 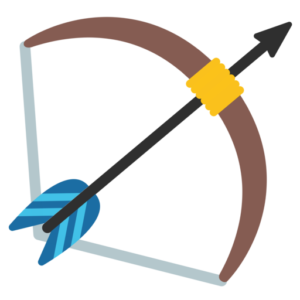 From ancient mammoth hunting to the legend of Robin Hood, archery has a long and rich history. This is why it was proposed to Unicode in 2015 with a number of other sports-related emoji to “fill in gaps in symbols related to popular sports—with special attention to sports featured in international competitions such as the Olympic games.” Unicode 8.0 approved the bow and arrow emoji just in advance of the 2016 Rio de Janeiro summer Olympics.

The emoji—fairly uniform across platforms apart from some minor color differences—depicts an arrow strung in a bow and ready to fire.

While the original intent of the bow and arrow emoji was to celebrate the sport of archery, it became a symbol of the mythic Cupid and therefore love. In Roman myths, the goddess of love, Venus, deployed her mischievous son Cupid, to strike powerless humans with his arrows and fall in love. These associations have continued into modern times—from popular music to, well, emoji.

Examples of 🏹 Bow and Arrow emoji

cupid hit me with precision 🏹❤️
@nelletapat, July, 2018
Practiced with my bow for the first time today! Not the best quality, so the arrows don't always stick, and they curve a bit, but it's been good to help me work on my form and get the hang of it! 🏹❤️ #archery
@kawaiifuuu, July, 2018
SAGITTARIUS 🏹 Summer brings reconnection and run-ins with all manner of past associates. It’s also time to focus on your writing/communion or get your daily routines running at genius-level. This week features a stand-off around money or “worth”, more easily resolved next week.
@voluptuouswitch, June, 2018
SEE MORE EXAMPLES

Who uses 🏹 Bow and Arrow emoji?

Alongside the heart with arrow emoji, 💘, the bow and arrow emoji is commonly used to express love, affection, and attraction, whether it’s their bae or a celebrity crush. It’s very popular on Valentine’s Day.

200 days with the girl that attacks our hearts #200DaysWithChuu 🏹💗pic.twitter.com/LafQroiMPv

#ValentinesDay cards for the hockey fans in your life 🏹 pic.twitter.com/Zsy0Mn6xzd

Actual archers, and fans of archery, string the bow and arrow emoji to show off their skills or cheer on a competition.

Fictional archers, and their fans, also love the bow and arrow emoji. Characters include Robin Hood, the superhero the Green Arrow, and all things Hunger Games, thanks to the fierce slinging of its lead character, Katniss.

Starry-eyed astrology enthusiasts also use the bow and arrow emoji when discussing the sign of Sagittarius (and the constellation it is based on), which also has its own emoji form, a glyph representing an arrow: ♐.

Archery is all about hitting the target, which we use as a metaphor for something being perfect or on point—and making for a creative application of the bow and arrow emoji, often joined with the direct hit, emoji 🎯.

Breakfast was on the money 🏹

When the emoji debuted in 2015, the website Bustle even cleverly suggested to their readers to use it in sexting to indicate an orgasm.