What does 🤡 Clown Face emoji mean?

The Clown Face 🤡 emoji depicts the face of a circus clown. It is commonly used to convey various silly, goofy feelings or that someone is acting like a clown (“foolish”). As some people find clowns creepy, the emoji is also sometimes used to mean that something or someone is scary or suspicious.

Where does 🤡 Clown Face emoji come from? 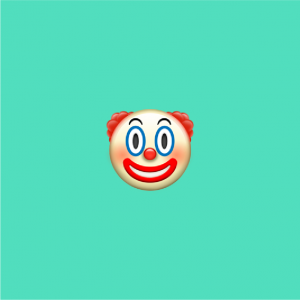 The Clown Face emoji 🤡 was approved under Unicode 9.0 in 2016. The emoji resembles a classic clown’s face with white makeup, a red nose, and two tufts of hair. On most major platforms, the clown has red hair, but the emoji sports blue hair on WhatsApp, Twitter, and Facebook.

While clowns are supposed to be funny and friendly to children, a significant number of people find them disturbing or scary, and they have been depicted as threatening or evil, such as the clown character of Pennywise from Stephen King’s It. As a result, the Clown Face emoji 🤡 is frequently used when a person is describing something as scary or creepy.

The Clown Face emoji 🤡 commonly conveys someone is silly or funny or that they are clowning around (acting foolish).

Heard some 💩 excuses by dopey commentators but Graeme Souness blaming the length of the grass for Liverpool being 4 – 1 down at half time takes the biscuit 🍪. What a clown 🤡.

The emoji is also used to describe something creepy or unsettling.

This is not meant to be a formal definition of 🤡 Clown Face emoji like most terms we define on Dictionary.com, but is rather an informal word summary that hopefully touches upon the key aspects of the meaning and usage of 🤡 Clown Face emoji that will help our users expand their word mastery.