DansGame is a special emoticon featuring the disgusted-looking face of a Twitch platform gamer, used by other gamers to indicate revulsion, anger, or annoyance.

Where does DansGame come from? 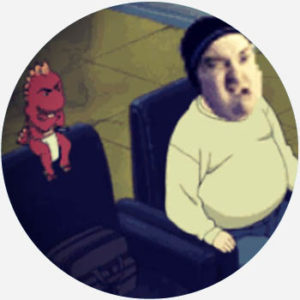 Launched in 2011, Twitch is a popular online streaming service for watching and uploading digital video broadcasts, especially live video-game streams. In 2015, the service developed its own set of characters referred to as emotes. While they are used like emoji or emoticons, emotes tend to be the faces of Twitch employees or popular users.

One such emote, DansGame, is an image of the popular Twitch streamer who goes by the username of DansGaming. The player, presumably named Dan, has been releasing video game streams since 2009. The DansGame emote, which shows a screen-capture of DansGaming making an expression of disgust, was captured in 2010. When DansGaming became an administrator on Twitch, he received an emote with his face on it, now known as the DansGame.

Don't text and drive DansGame
@YDSHarm, March, 2018
Wanting to DansGame or WutFace at people who don’t know twitch hurts my heart. I wish they could understand.
@grmpiestunicorn, March, 2018
Can we get an emote similar to twitch's DansGame emote? I need it now more than ever with the 2v2 mode. Just something I can do to tell my ally that what they just did is extremely questionable. The red angry emote and the ':P' emote doesn't do it for me, I don't feel like they properly express my feelings in those moments.
Terra Reveene, Minion Masters (forum), July, 2017
SEE MORE EXAMPLES

Like other Twitch emotes, DansGame is a popular form of communication among young adult and adult gamers, both on and off the platform. In multiplayer gaming, or when watching a Twitch stream, one might use the DansGame emote as a way to register one’s revulsion with something on the screen, such as a particularly gory death, a blast of alien slime, or an offensive joke in a video-game chat. Alternatively, one could use Dansgame to express anger or annoyance. For example, if players are irked by an immature younger player, they might type out several DansGame emotes as if rolling their eyes or shaking their heads in real life.

When the DansGame emote is unavailable on the keyboard of a platform, users might simply type out DansGame for the same tonal effect (e.g., tweeting “You’re mixing yogurt with your eggs. Gross, DansGame.“). People familiar with the emote may refer to similar facial expressions in real life as a DansGame. In addition to being used as a noun, DansGame can also be employed as a verb for showing disgust or annoyance. For example, one could say, “Every time that sleazy guy makes a comment I just DansGame him.”

This is not meant to be a formal definition of DansGame like most terms we define on Dictionary.com, but is rather an informal word summary that hopefully touches upon the key aspects of the meaning and usage of DansGame that will help our users expand their word mastery.