What does the 🇮🇪 Flag of Ireland emoji mean?

The Flag of Ireland emoji 🇮🇪 is used to represent the country of Ireland and its rich culture and heritage. Éirinn go brach!

Where does 🇮🇪 Flag of Ireland emoji come from? 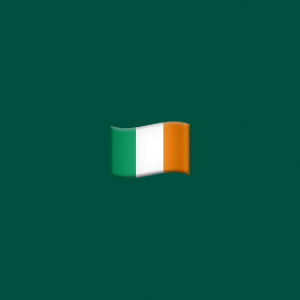 The flag of Ireland was first flown in 1848 by the young revolutionary Thomas Meagher, presented to him as a gift by French women sympathetic to the cause of Irish independence. They designed the flag as a tricolor to symbolize a truce (white) between Irish Catholics (green) and Protestants (orange).

The Irish flag first became a national symbol when it was flown during the 1916 Easter Rising, when Ireland established its independence from Great Britain. It was officially adopted in 1922.

The Flag of Ireland emoji 🇮🇪, meanwhile, was officially added to Unicode’s Emoji 1.0 in 2015, designed to look like it is waving on some platforms. It will display as IE, Ireland’s country code, on unsupported devices.

It’s not to be confused with the Flag of Côte D’Ivoire emoji 🇨🇮, which features the same colors except the orange stripe comes first. Northern Ireland, part of the UK, uses the Flag of the United Kingdom emoji 🇬🇧.

Tonight is big night for IRELAND against Denmark, We really hope we can win tonight 💚🇮🇪 Guess what will be the score? We say 1-0 to IRELAND 😉
@irish_daily, November 11, 2017
Happy #StPatricksDay! Whether you're hunting for leprechauns or libations, be sure to catch our sparkling green lights tonight, with our mast sporting the colors of the Irish flag! ☘️ 🇮🇪
@EmpireStateBldg, March 17, 2018
🇮🇪🇮🇪The first ever permanent exhibition on the Irish Flag has been opened at the GPO. The display includes details on the history of the tricolour and on the man who first flew it—Thomas F Meagher.🇮🇪🇮🇪
RTÉ News, Facebook, February 23, 2018
SEE MORE EXAMPLES

The Flag of Ireland emoji 🇮🇪 is used online and in text messages for all sorts of current content concerning the country, including sports, politics, culture, and the Irish language.

Never been on a march til today. My generation are a credit to our country 🇮🇪 #RepealThe8th pic.twitter.com/h4tCCw3CwP

Ireland’s lush greens and rugged coasts make the country a popular place to visit, so many tourists post travel updates in Instagram or Twitter with the Flag of Ireland emoji 🇮🇪.

Ireland has produced some of the world’s great literature, music, dance, wool, dairy, and yes, beer and whiskey, so the Flag of Ireland emoji 🇮🇪 waves over content concerning the country’s many cultural treasures.

So we’ve had our good kick #Guinness – on to the second one! Ireland here we come! @GuinnessUS to @GuinnessIreland ❤️✈️🇮🇪🇮🇪🇮🇪✈️❤️ pic.twitter.com/QvawpAaJqs

Many Americans are proud of their Irish heritage, and the Flag of Ireland emoji 🇮🇪, often paired with the Shamrock emoji ☘️, is used to express this sentiment on St. Patrick’s Day.