What does does Hugging Face emoji 🤗 mean?

Bring it in, there, buddy. The hugging face emoji is meant to depict a smiley offering a hug. But, it’s often just used to show excitement, express affection and gratitude, offer comfort and consolation, or signal a rebuff. This range of meaning is thanks to the ambiguous—and very grope-y—appearance of its hands.

Where does 🤗 Hugging Face emoji come from? 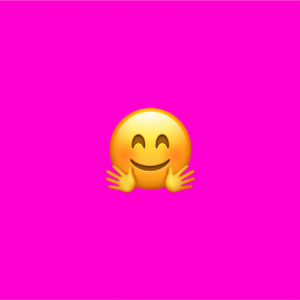 The hugging face emoji was approved in 2015 under Unicode 8.0. It came out alongside other popular smileys, include upside-down face 🙃 and face with rolling eyes 🙄.

Across platforms, the emoji is fairly uniform, showing a smiling face with smiling eyes and hands meant to represent giving a hug. On Apple and Microsoft, for instance, the hands are outstretched, as if reaching out for the hug. On Google and EmojiOne, the hands face inward, as if already in the act of the embrace.

Thanks to the appearance of its hands, the emoji is sometimes referred to as the jazz hands emoji, which tech entrepreneur Elon Musk notably called it in 2018 after his iPhone suggested the emoji when he typed “jazz hands.”

I just realized there is a jazz hands emoji 🤗

And, it’s those very hands that have unnerved many emoji users since its 2015 debut, finding the hugging face emoji not comforting—but creepy.

This is one creepy hug emoji fck 🤗

In musical theater and dance, jazz hands are a kind of song-ending flourish of the hands, shaken with palms out and fingers outstretched. Because some think the hands of the hugging face emoji resemble that dance move, they use the emoji to express excitement, such as upon a big reveal or ta-da moment.

So ready for the new gym to open in Bennettsville 🤗

The broad smile and open arms of the hugging face emoji also lend it to expressions of love, joy, gratitude, appreciation, or feeling blessed.

Just do ya own thing and don’t rely on anyone 🤗

Congrats @hannahhleigh14 and my niece @AaaudreyCaves18 I’m proud of you two love ya both 🤗💍 pic.twitter.com/V9SLemoUoJ

Spreading nothing but positivity and love from now on 🤗

Others see a kind of nonchalant dismissal in the emoji’s gesture, a sort of friendly-faced don’t-let-the-door-hit-you-on-the-way-out. And so, the hugging face emoji can also signify a rebuff from someone who is not going to put up with your drama.

True to its name, finally, the hugging face emoji does see some use in showing comfort and support, giving a digital hug.

I’m so sorry, Farrah. Losing a special loved one isn’t really something we get over. Some days the memories make us smile, other days it’s painful. I’m keeping you in my prayers & sending hugs your way! 🤗