What does 🍨 Ice Cream emoji mean?

Where does 🍨 Ice Cream emoji come from? 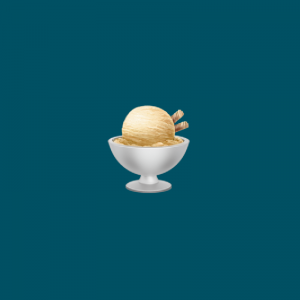 The Ice Cream emoji 🍨 was approved under Unicode 6.0 in 2010. On most major platforms, the emoji resembles at least one scoop of ice cream in a dessert bowl. The flavors, number of scoops, and toppings vary depending on the platform. The Google and Twitter versions of the emoji feature a blue bowl while most other platforms show a white or gray one.

The Ice Cream emoji 🍨 is used to refer to ice cream or used more generally to refer to desserts.

President Biden just revealed that his favorite ice cream is chocolate chip. Mine is coffee. What’s your favorite? 🍨

Best part of being an adult? Eating dessert first. 🧁 🍨 🧁

This is not meant to be a formal definition of 🍨 Ice Cream emoji like most terms we define on Dictionary.com, but is rather an informal word summary that hopefully touches upon the key aspects of the meaning and usage of 🍨 Ice Cream emoji that will help our users expand their word mastery.