What does 🖕 Middle Finger emoji mean?

The middle finger emoji represents the physical act of raising one’s middle finger—considered an obscene gesture in many cultures—and is used for offensive or humorous effect.

Where does 🖕 Middle Finger emoji come from? 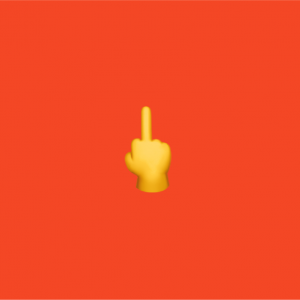 The raising of one’s middle finger (also referred to as “giving someone the finger,” “flipping someone off,” or “flipping the bird”) is a traditionally obscene gesture in Western culture. The gesture dates as far back as 423 BC when Ancient-Greek comic-playwright Aristophanes used the gesture in his play, The Clouds. It is considered a phallic symbol, originally meant to threaten violent sexual penetration, which has developed into its contemporary meaning of “fuck you” or “go fuck yourself.” It is now often used to express displeasure, rage, excitement, or protest.

Approved by Unicode in 2014 (U+1F595), the middle finger emoji became widely popular at the end of 2015. This is when Apple released the iOS 9.1 update, which included the middle finger among several new emoji. The emoji’s official name is Reversed Hand With Middle Finger Extended, and it also goes by the names rude finger, flipping the bird, and dito medio.

I'll NEVER go back FU#K THE NFL.🖕
@deplorable_dawg, January 2018
this year it's all about me & my goals & if you fucked me over in 2017, don't even think you can come back in my life in 2018 😂😂🖕
@jessicaraeiman, January 2018
I know I'm an adult and a professional but it sure is hard somedays on this website not to respond simply with the middle finger emoji.
@shannonmstirone, January 2018
SEE MORE EXAMPLES

Raising the middle finger has become a common, vulgar gesture signifying anger or rebellion, though it may be most recognizable in Western culture. It can be used in a range of contexts: by celebrities when photographed by paparazzi, by drivers expressing road rage, or among friends in a playful manner. The emoji is used similarly.

As with the actual gesture, the emoji may be considered extremely rude and inappropriate, especially in formal contexts.