What does 🗿 Moai emoji mean?

The moai emoji depicts a head with elongated ears, nose, and a heavy brow, appearing to be carved out of gray stone.

Use of the moai emoji is usually meant to imply strength or determination, and it’s also used frequently in Japanese pop-culture posts.

Where does 🗿 Moai emoji come from? 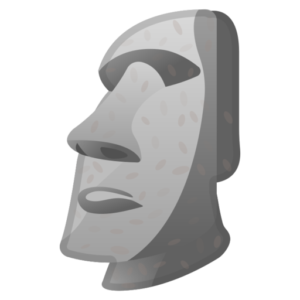 Well … moai is a type of rock carving found on Easter Island in Polynesia, dating back to the year 1250. They are monolithic creations, with the faces of deified ancestors; the oversized heads are the largest feature of the figures.

The origin of this emoji is a bit clouded, as some claim it was suggested by Japan in reference to a statue referred to as Moyai at the Shibuya Station in Tokyo, Japan, something of a landmark. Moyai looks a bit like the Easter Island moai statuary, with the long broad nose and pronounced brow. But, the similarity ends there.

The Moyai statue, a gift in the 1980s to the district from Japan’s volcanic Nii-jima Island, has very full lips (moai are thin) and the carving implies a mane of hair, which is not a feature of the maoi carvings. Nii-jima is home to numerous volcanic rock carvings of large faces and heads, called Moyai, which means ‘to work together in effort’ in the local dialect. They are like the younger cousins of Polynesia’s ancient carvings.

The emoji, in our opinion, more closely resembles the Eastern Island relics. But some feel Japan sought the Moyai emoji as an accompaniment to other emoji, such as the Japanese flag and the Tokyo Tower. Others think the Polynesian relics are so distinctive and historic, that they deserved the emoji treatment.

Most platforms’ version of this emoji present a reasonable representation of actual moai, also spelled mo‘ai because we had to add another name just to confuse you … although most of the ancient carvings of the actual statues include bodies as well.

The boy next to me smells so much to alcohol God please let me finish this class asap 🗿
@boredmegane, September, 2018
is buying the lg phone a test to see just how whipped you are for bts? bc there’s no other way i’d even consider buying an lg phone but now bts got me questioning my loyalty to apple 🗿
@bxngtxneun, September, 2018
🗿 I block people and keep it moving. My time too valuable to worry aboutcha 🗣.
@ZaquanB, September, 2018
SEE MORE EXAMPLES

The moai emoji is seen frequently in social-media posts that revolve around Japanese and Korean pop music  (like BTS, also known as Bangtan Boys), and in posts related to Japanese and Polynesian culture in general.

However, it can also be used to imply strength, silence, and mystery.

I’m how the replies are literally from people who LIVE IN asian countries talking about how they discovered them through radio/tv 🗿
Like y’all are literally proving our point. No one outside of Asia heard about kpop without SNS https://t.co/uBoFmtHw3W

Of course, it’s also used in reference to the real moai of the Polynesian Easter Island, and to things “Tiki” related, or even tropical in flavor.

Come out to Denton Bronco Stadium this Friday @ 7!!!!!! As the Knights take on the Bronco, wear Hawaii themed clothes!!!⚔️🌸🗿 pic.twitter.com/2GZqhbWgCZ

This is not meant to be a formal definition of 🗿 Moai emoji like most terms we define on Dictionary.com, but is rather an informal word summary that hopefully touches upon the key aspects of the meaning and usage of 🗿 Moai emoji that will help our users expand their word mastery.