What does 🦦 Otter emoji mean?

The Otter emoji 🦦 depicts the playful, lovable, furry, aquatic mammal, the otter. It’s often used in posts about the creature, friendship, and love (as otters are often photographed holding paws), or to illustrate concepts of staying afloat.

The Otter emoji 🦦 is used along with other animal emoji to honor UN World Wildlife Day, which is on March 3.

For obvious reasons, this emoji has us saying “awww–ter.” (See what we did there?)

Where does 🦦 Otter emoji come from? 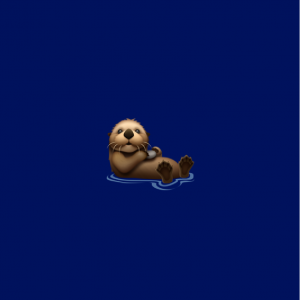 The Otter emoji 🦦 was approved under Unicode 12.0 in 2019, along with other new animals in the emoji kingdom, including the Skunk 🦨 and Sloth 🦥 emoji. Designs for the Otter emoji 🦦 show the light-brown critter on its back with its arms on its belly or at its mouth. Microsoft’s and Apple’s otters appear to be cradling a stone.

The famed Monterey Bay Aquarium has (humorously) argued that the Otter emoji 🦦 specifically depicts a river otter (vs. sea otter), as it possesses a longer body with a smaller face.

🦦 Otterly cute Olivia was rescued when she was found in bustling #Mansfield town centre looking terrified. This poor cub is only 4-months-old and @RSPCAStapeley will be working with her for 8 months to get her ready to be released back to the wild!
@RSPCA_official, February 22, 2019
The cast's daemons are: / "Pizza Rat" - @Lin_Manuel 🐀 / "Sea Otter" - #JamesMcAvoy 🦦 / "Sphinx or Cat" - #RuthWilson 🐈 / "Annoying Tiny Tropical Monkey" - @DafneKeen 🐒 / "Woodpecker" - @jackthorne 🐦 / "Big Wolf" - Jane Tranter 🐺 / #HisDarkMaterials #SDCC
@darkmaterials, July 18, 2019

The Otter emoji 🦦 is frequently used when discussing actual otters. Many wildlife preservation agencies as well as zoos and aquariums use it to share educational information about otters. For example, the Otter emoji 🦦 is used along with other animal emoji to honor animals and plants, their livelihood, and their conservation on UN World Wildlife Day, which  falls on March 3 each year.

Here are some images taken by our cameras during the #otters inventory this winter. Do you recognize these wild #animals? 🐈 🐺 🦊 🦦 pic.twitter.com/3eMju8ABvC

Happy World Wildlife Day 🐾🐙🐢🦦 show compassion to all the beings we share this planet with!

Otters are now officially back on the River Meon.

Individuals also use the Otter emoji 🦦 whenever admiring the playful aquatic creature. It also appears with emoji puns (“significant otter” for “significant other” or “you otter know” for “you ought to know”).

Mug update! (#Mugpdate?) It turned out very well! I will drink my tea ☕ with pride #otter 🦦 #mug #flyingsaucercafe pic.twitter.com/zyu2PgKpcF

This is not meant to be a formal definition of 🦦 Otter emoji like most terms we define on Dictionary.com, but is rather an informal word summary that hopefully touches upon the key aspects of the meaning and usage of 🦦 Otter emoji that will help our users expand their word mastery.