It can be a gender-inclusive representation of romantic involvement or a symbol of cooperation and community.

Where does 🧑‍🤝‍🧑 People Holding Hands emoji come from? 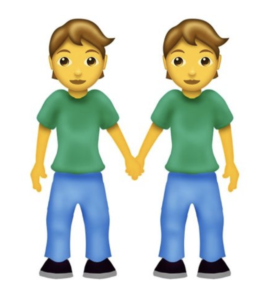 Unicode 6.0 in 2010 approved 👫 woman and man holding hands, 👭 women holding hands, and 👬 men holding hands emoji. In 2019, Unicode added people holding hands as a more gender-inclusive option as well as enabled all skin-tone variations for the hand-holders therein. It is composed of a sequence of the 🧑 adult, 🤝 handshake, and 🧑 adult emoji.

The default emoji features two yellow, gender-unspecified people holding hands as they stand upright. Twitter’s implementation as of April 2019, however, is identical to its woman and man holding hands emoji. 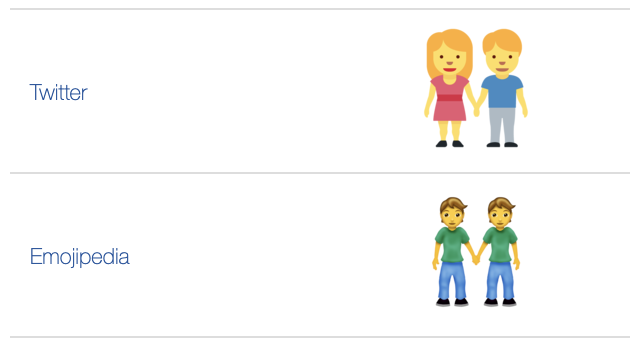 The update, becoming available on devices throughout 2019, was widely hailed as a positive act of social representation and inclusivity.

All otter jokes aside, these (and the man-man/woman-woman/gender neutral couples) are the emoji I’m most excited for in Unicode 12!!

Emoji should look like the real 🌍. It doesn’t matter how many cute animals you have if you don’t represent a diversity of races and genders.

I’m so excited for the deaf person and the people holding hands emoji. I really hope trans flag gets added next year.
@skeivefroya, February, 2019
Gender-neutral couple emojis are coming to phones this Fall!!! 📱👍❤️ / The gender neutral ‘People holding hands’ emoji will be listed under the family category ...
@smilingleske, February, 2019
... users will be able to maximally configure the "people holding hands" emoji with skin tone and gender options, allowing for couples of varying ethnicities that are same gender, mixed gender, or have one or both partners who identify as non-binary, to configure an emoji that is more representative of them.
Selina Jeanne Sutton, The Conversation, February, 2019
SEE MORE EXAMPLES

Prior to implementation of people holding hands, people have used its constituent sequence of 🧑 adult, 🤝 handshake, and 🧑 adult to indicate teamwork and cooperation, as the handshake doesn’t suggest the same romantic involvement as hand-holding emoji.

#Teamwork makes the #smallbiz dream work. Get to know your employees better with these 6️⃣ entertaining activities. 🧑‍🤝‍🧑 https://t.co/Jfo4fK8q7e

Upon further rollout of people holding hands emoji in 2019, expect it to be used for a variety of non-cisgender couples and relationships along with other, non-romantic senses of human community.

In what way has #space played a role in your relationship/s with your special someone? 🧑‍🤝‍🧑