What does 🥨 Pretzel emoji mean?

The pretzel emoji 🥨 depicts a salty, heart-shaped, twisted pretzel. The emoji is commonly used in posts about pretzels and other baked treats. It’s also commonly associated with Germany 🇩🇪 and baseball ⚾. Sometimes, the emoji may be used as a metaphor for something “twisted,” like a pretzel.

Where does 🥨 Pretzel emoji come from? 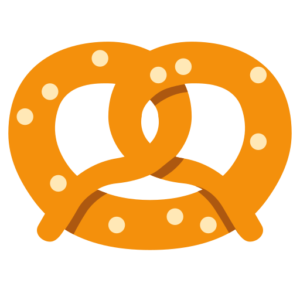 Pretzels go back to European monasteries of the Middle Ages, when dough was rolled out and twisted into bite-size knots.

The pretzel emoji 🥨 looks a lot like the kind of mass-produced pretzels you buy in bags at the grocery store, and while those certainly satisfy cravings for something crunchy and salty … a pillowy, fresh-baked pretzel is another animal. Over the years, in an attempt to gourmet-up the modest treat, pretzels have taken on all kinds of flavoring partners, from cheese to chocolate, spices to sweet glazes. And don’t forget all the pretzel dips. Swoon.

Why did it take so long to get a pretzel emoji 🥨 ? It only came about in 2017, as part of Unicode 10.0 and Emoji 5.0, well after the bread 🍞, pizza 🍕, and hot dog 🌭 emoji appeared. What gives? Oh well, we have it’s emoji deliciousness now so use it tastefully, friends. Each digital platform uses basically the same form, a round shape with twisted strands, colored in golden brown and topped with white specks of salt. 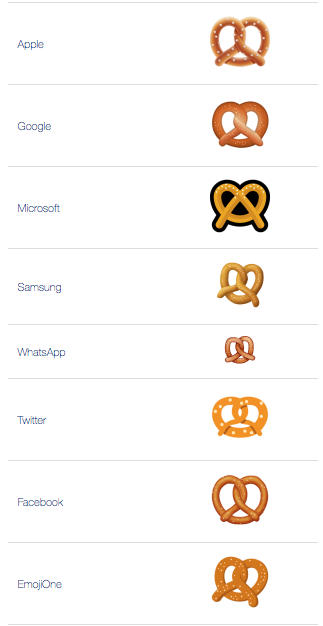 One of the very few advantages of having big boobs is that they catch your food when you miss your mouth 🥨👌
@georgiahooker_, December 2018
The simple thing you can do every time you get in a vehicle to ensure you don’t end up twisted like a 🥨. #BuckleUp #NationalPretzelDay
@ISPBreman, April 2018
I’m so hungry but I’m refusing to eat right now so I can eat an obscene amount of @AuntieAnnes pretzel nuggets at the mall later. 🥨 #priorities
@emmy_jay95, December 2018
SEE MORE EXAMPLES

You can almost smell the warm chewy goodness from this page, right? From fresh-baked treats to snappy, salty crisps, the modest pretzel is celebrated—using the pretzel emoji 🥨 —all over social media by those who love them. And … to love them is to eat them.

The pretzel emoji 🥨 is also used to sell beer and wine and in posts about German and other European foods and cultures.

New blog post is up 🍻 if you've ever thought about going to Oktoberfest in Munich DO IT !! but first read my blog post for some important info and tips! 🥨https://t.co/wPLwKUiokw#meetyouatarrivals #munich #oktoberfest #travelblog pic.twitter.com/qx0OcFJum1

Get warm and fuzzy, mulled wine season has arrived!😍🎄🥨🍷
Tomorrow, 4pm, guests only, sign up at reception #circusbtchttps://t.co/EdoNxjfTaH pic.twitter.com/zUIy9YPmbR

Year 3/4 ended their topic with a European Feast… and what a feast it was! Thank you to all that came to support and provided delicious treats! 🇳🇱🍰🇩🇪🍪🇮🇹🥨🍕🥐 pic.twitter.com/076gZZWQML

You might also find the pretzel emoji 🥨 in posts about baseball. Pretzels are beloved and traditional ballpark snack.

The pretzel emoji 🥨 is also occasionally used when talking about things that are twisted … like a pretzel.

This is not meant to be a formal definition of 🥨 Pretzel emoji like most terms we define on Dictionary.com, but is rather an informal word summary that hopefully touches upon the key aspects of the meaning and usage of 🥨 Pretzel emoji that will help our users expand their word mastery.