What does 🐇 Rabbit emoji mean?

The Rabbit emoji 🐇 depicts a rabbit facing to the left. It is commonly used to represent real and fictional rabbits and bunnies, spring, and Easter.

The use of the Rabbit emoji 🐇 drastically increases in the weeks leading up to Easter, which is a movable holiday commemorated each spring. During this holiday, the Rabbit emoji 🐇 often appears alongside the Rabbit Face emoji 🐰 and accompanied by the hashtag #Easter. In 2021, Easter falls on April 4.

What’s the difference between a rabbit, a bunny, and a hare? Hop over here to learn the answer.

Where does 🐇 Rabbit emoji come from? 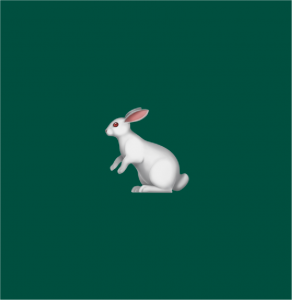 The Rabbit emoji 🐇 was approved under Unicode 6.0 in 2010. On all major platforms, the emoji depicts a rabbit facing to the left. Depending on the platform, the illustration of the rabbit ranges from realistic to stylized. The Facebook version of the emoji has brown fur, while most other platforms have a rabbit with white or grey fur. The Google and WhatsApp versions have whiskers while the Apple version has red eyes.

The Rabbit emoji 🐇 is often used during Easter as a reference to the Easter Bunny, a legendary bunny that hides Easter eggs for children to find. Why a bunny (and not, say, a chicken) to lay those Easter eggs? This tradition is based on a similar German holiday brought to the US by immigrants, and it’s believed that the short gestation period and reproductive speed of rabbits led to a cultural association with spring (when they mate) and fertility.

Taking advantage of the Easter Bunny’s fame, many companies sell decorations, toys, and candy in the shape of bunnies/rabbits during the Easter holiday season. The Rabbit emoji 🐇 is also used alongside mentions of fictional bunnies and rabbits, with the most frequent being Bugs Bunny from Looney Tunes.

The Rabbit emoji 🐇 is used to reference actual and fictional bunnies and rabbits.

I cannot wait to see Lola Bunny in Space Jam 2. 🏀🐇

The Rabbit emoji 🐇 is frequently used on and around Easter.

Can we skip Valentine’s Day and move on to Easter so all the cute bunny things will go on sale. 🐰🐇

This is not meant to be a formal definition of 🐇 Rabbit emoji like most terms we define on Dictionary.com, but is rather an informal word summary that hopefully touches upon the key aspects of the meaning and usage of 🐇 Rabbit emoji that will help our users expand their word mastery.