The raising hands emoji depicts two raised hands, palms up, with lines above them, implying motion.

It's used in a celebratory way, to express joy, pride, or surprise (the good kind). 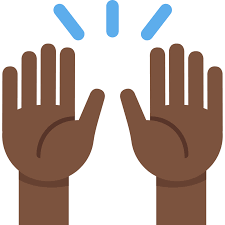 Rooted in the idea of “give me ten!” (slapping your two palms against someone else’s), the raising hands emoji was originally approved as part of Unicode 6.0 in 2010 under the name “Person Raising Both Hands in Celebration.” This wooot-filled emoji was added to Emoji 1.0 in 2015.

Two raised hands are often used to signal a “congratulations!” or “we did it!”

The raised hands emoji then is used in posts and texts that relate to a victorious personal moment, a sports win, or a moment of pride.

WHAT A NIGHT AND WHAT A RESULT! 🙌@UWCL quarter-finals, here we come! 💙 #CFCW pic.twitter.com/E6V1r7BTjF

Del Boy or Phantom of the Pitch?

This made me laugh my head off… yet so true #WomenRule 🙌😂😂😂 pic.twitter.com/HmqdAWyGJA

Can't find words to describe how amazing @BoRhapMovie was! 🙌 @KeLu175 and I have to see it a second time! 🎹🎼🎤 Thank you for one oft the greatest movies ever made 🙏 pic.twitter.com/XYGhPjtWrx

It’s also used in moments of anticipation and inspiration:

The weekend is almost here! 🙌 Who's already dreaming of that perfect track? pic.twitter.com/yIFk6cV6d6

The raised hands emoji is often paired with the clapping hands and other emoji to show approval and pride in someone else’s work, as though you’re giving them a double-high-five, a.k.a. high-ten:

So cool! I haven't seen that before! Now I'm inspired for next year. 🙌🙌 Thank you! https://t.co/GzPRsk3vIx

And occasionally, it’s used in a way to express more spiritual sentiments: