What does Red Flag 🚩 emoji mean?

On social media, the Red Flag emoji 🚩 often represents the sense of the term red flag that’s used in the context of dating and relationships to refer to a sign that a person will turn out to be (or is) a bad or problematic partner.

In October 2021, this use became the focus of a popular meme in which a statement is followed by a series of Red Flag emoji 🚩 to jokingly indicate that the statement is a relationship dealbreaker.

People who use screen readers (such as people with visual impairment) have noted that the red flag meme can be particularly frustrating since screen readers, which read out the official name of every emoji included in a post, will repeat “Triangular Flag” as many times as the emoji has been included in the post (often many, many times). This particular reaction to the meme is an example of the increasing awareness and advocacy around online accessibility and how online content is experienced by people with disabilities.

Where does 🚩 Red Flag emoji come from? 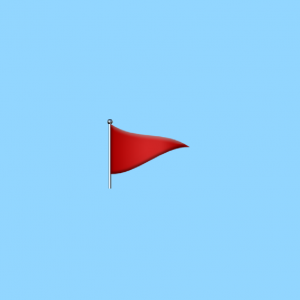 The Red Flag emoji 🚩, which is popularly known as Triangular Flag emoji 🚩, was approved under Unicode 6.0 in 2010 as “Triangular Flag on Post.” On most major platforms, the emoji depicts a triangular red flag attached to a grey flag post. The Facebook version of the emoji displays just the flag. Depending on the platform, the flag may be drawn to appear as if it is blowing in the wind or has a sheen as if it was made of plastic or similar material.

On social media, the Red Flag emoji 🚩 is popularly used to refer to “red flags” in relationships or potential relationships—signs that someone would not make a good romantic partner or that they generally have a bad personality.

If she takes photographs of every food she eats 🚩🚩🚩.

In October 2021, the Red Flag emoji 🚩 was used in a popular meme in which it was posted along with a seemingly minor or innocuous statement, with the joking implication that the poster considers such a statement to be a serious warning sign to avoid the person saying it.

The meme became popular enough that many brands posted their own version, typically involving a negative statement about their product.

The Red Flag emoji 🚩 is commonly used to refer to a red flag in the sense of a sign of danger or potential problems in a relationship.

When they speak dirty about their ex 🚩🚩🚩🚩🚩

“I prefer being friends with guys since there’s less drama” 🚩🚩🚩

In particular, the Red Flag emoji 🚩 is used in the red flag meme, in which a seemingly innocuous statement is implied to be a relationship dealbreaker.

This is not meant to be a formal definition of 🚩 Red Flag emoji like most terms we define on Dictionary.com, but is rather an informal word summary that hopefully touches upon the key aspects of the meaning and usage of 🚩 Red Flag emoji that will help our users expand their word mastery.