Previous Word
Next Word or

One special use of the shooting star emoji is in reference The More You Know, a public service announcement series from NBC, popular in the 1990s and featuring a shooting star icon. People post "the more you know" and 🌠 online when delivering some feel-good life-lesson or ironic observation. 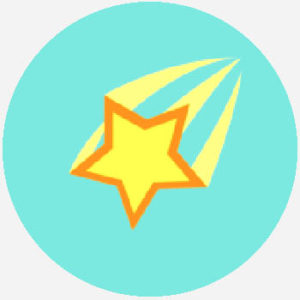 It was 2010 when the shooting star emoji was approved under Unicode 6.0. On many platforms, including Apple, the shooting star emoji appears as a star in a blue box, representing the night sky. On other platforms, such as Google, the star stands alone. On all platforms, though, the yellow-gold star moves from the upper-righthand direction to the lower-lefthand corner, as indicated by the trail in its wake and shown in the screenshot from Emojipedia below. 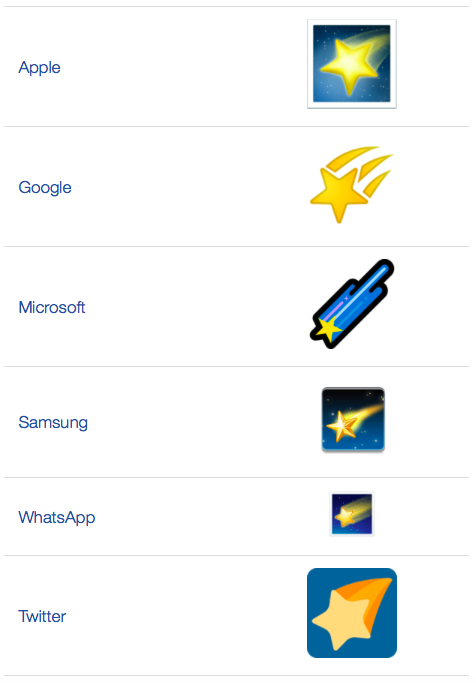 The shooting star emoji is located in different categories on different platforms. On Apple devices, this emoji sits beside the fireworks emoji 🎆 and the sparkler emoji 🎇 in the Travel & Places section. Android users will find it next to the white medium star emoji ⭐ and the glowing star emoji 🌟 in the Animals & Nature section. So, while a shooting star is decidedly a natural celestial phenomenon, Apple users may be more inclined to use it with its neighboring emoji exploders when keyboard-smashing.

Shooting stars are a rare and beautiful sight, so it’s no surprise the shooting star emoji gets used in expressions of affection for significant others and celebrity crushes.

The luminescence of the shooting star emoji also comes in handy during fireworks-themed holidays such as New Year’s Eve or Day, US Independence Day, or Chinese New Year.

Finally, since 1989, NBC has been running The More You Know, a series of PSAs. They usually spotlight a celebrity delivering a pro-social message (e.g., stay in school) capped with a theme jingle and a rainbow-tailed shooting star under the catchphrase “The More You Know.” The PSAs became widely parodied in popular culture, which extended to memes in the 2000s. The shooting star emoji is not to be left out on the joke or allusion. Users will reference the The More You Know series with the shooting star emoji and some kernel of wisdom. Oftentimes the lesson is just an ironic insight or comment, but sometimes the message is earnest.

There’s a difference in being opinionated than being educated.
…..The More You Know….
🌠🌈#TheRibbonMaker

Previous Word
Next Word or