What does 😏 Smirking Face emoji mean?

Up late at night on Tinder? Time to break out the smirking face emoji to make sure your sexy innuendo lands.

Adding this emoji to a text indicates you are flirting or sending a suggestive message. On social media it can also mean you are feeling smug and self-satisfied because you just did something baller.

Where does 😏 Smirking Face emoji come from? 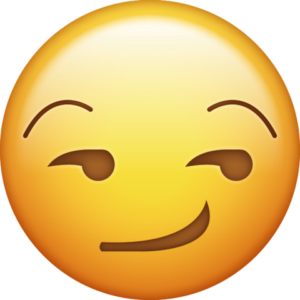 Apple snuck this little grinner into their 2008 iPhone 2.2, but limited it to their Japanese market. The rest of us were able to start smirking to our friends and loved ones in 2010 when it was approved by the Unicode Consortium.

It made its onto Twitter a year later. Snapchat included it in their 2015 update as a Friends Emojis, a system to help you manage your contacts by adding emoji next to each person to indicate how you feel about them.

Across platforms this emoji’s round yellow face has an impishly curved smile and looks slyly to the left. On the Google and Microsoft versions the curves are softer, giving it a shyer appearance. Most have raised eyebrows, which Facebook and LG leave off. Only Mozilla’s version looks straight attcha.

Starting to accept my thicc self for who I am. I'm not skinny, I don't have a flat tummy, a thigh gap or a cute perky lil chest. I've got a jiggly tummy, curves, a big butt and big squishy boobies. You know what? That's fine. I'm still sexy AF 😏
@NerdyGirlShay, September, 2018
😏: You're their Best Friend, but they aren't your Best Friend. You're someone they send the most Snaps to, but they aren't someone you send Snaps to the most.
Snapchat support, Friend emoji guide
today is my grandpa’s 80th birthday. he’s the only man in his family to reach that age. I just called him to say happy birthday. me: how does it feel to be 80? grandpa: I don’t feel 80, I feel silly. 😏
@skarlamangla, June, 2018) https://twitter.com/skarlamangla/status/1004086334401777664
SEE MORE EXAMPLES

Flirty texters use the smirking face to make sure their messages comes across loud and clear.

The smirking face emoji is used a lot in DMs on dating apps, particularly by men. In 2017, the dating app Clover analyzed the use of emoji in their messaging service and found that the smirking face was the most common emoji men sent to women. Women aren’t always having it. Women are less likely to respond to messages with that emoji in it than men are … OK guys.

Some guy I don't know messaged me on Facebook saying "Hey 😏" then *____sent a photo* then "You know you like it, just accept it." Definitely not opening that chat.

It can also be used by folks who want people to know they have been just a little itty bit naughty.

But it can also be a way to tag a silly joke, no sexual innuendo needed.

Pun up or shut up. You got crafting pun game? 😏 #MakingIt pic.twitter.com/UHqq6mf5Ln

You’ll also find it in posts by people bragging about looking good, working out, or making that money.

Birthday outfit just came in the mail 😍.. clothes really do look better when you workout 💪🏽😏

Snarky Snapchat users will put it next to a contact who snaps them a lot but who they never snap back.

I feel rly uncomfortable with the new snapchat update there is a "😏" emoji next to a conversation with my mum wtf ????