What does 🕷️ Spider emoji mean?

The Spider emoji 🕷️ depicts a black, or rarely brown, spider with eight legs. The emoji is modeled after a house spider or the funnel-web spider, a creature native to Australia whose potent venom can reportedly kill a person in minutes.

The Spider emoji 🕷️ symbolizes the fascinating and dangerous arachnid and is associated with spookiness, witches, Halloween, and Goth culture.

Where does 🕷️ Spider emoji come from? 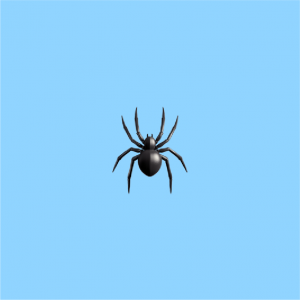 The Spider emoji 🕷️ was approved by the Unicode Consortium in 2014 along with its compatriots the spider web and scorpion.

This Spider emoji 🕷️ varies across platforms from a realistic and terrifying depiction with dimensional shading and pointy legs on Apple to a googly-eyed dangling arachnid on Google. Twitter’s spider is more abstract but still has enough detail to show pinchers, and Facebook’s is a realistic, three-dimensional monster.

People who both love and fear actual spiders use the Spider emoji 🕷️ to refer to the creature roaming in nature (or trapped in jars).

Was always and still never likes these bugs my entire life, but there so cool to look at #🕷 #🕸️ #spider #creepy

Since spiders are associated with the dark arts, Goths and fans of Black and Death metal music tend to tag their posts with this eight-legged emoji.

Expect to see a spike in Spider emoji 🕷️ use around Halloween because of its spooky associations.

Fans of the Marvel superhero Spiderman use the emoji in appreciation posts as well.

Finally, the feminist artist Louis Bourgeois was known for crafting enormous sculptures of spiders, so expect to find the emoji in posts about this pioneering contemporary artist.

Louise Bourgeois | Spider Couple (2003) Spiders 🕷🕷are an important theme in the work of Louise Bourgeois (1911-2010). However, and even though the sculptures are most famous, their first representations in Bourgeois' work actually were drawings in the 1940s when it was not until the mid-1990s that this motif was realised in sculptural form. This spider motif has often been used by Bourgeois to represent her mother – as in one of her biggest spider sculptures that is called 'Maman'. This couple here could then be a representation of the artist herself with her mother. #LouiseBourgeois #SpiderCouple

This is not meant to be a formal definition of 🕷️ Spider emoji like most terms we define on Dictionary.com, but is rather an informal word summary that hopefully touches upon the key aspects of the meaning and usage of 🕷️ Spider emoji that will help our users expand their word mastery.