The Star of David emoji ✡️ depicts the Star of David symbol of Judaism. This emoji is used in all manner of posts and digital media in relation to Judaism, Jewish culture, and spirituality.

Dedicate some time to learn about the Jewish holiday of Hanukkah, its origin, and the traditions that make it a reflective and joyous time.

Where does ✡️ Star of David emoji come from? 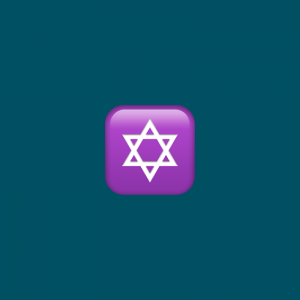 The Star of David emoji ✡️ was approved as part of Unicode 1.1 in 1993 and added to Emoji 1.0 in 2015. On all major platforms, the emoji depicts an all-white illustration of a six-cornered Star of David drawn on a purple square with rounded corners.

The Star of David is widely recognized as a symbol of Judaism. It is a hexagram, formed by two overlapping triangles that form a star with six points, and has been used as a symbol of Jewish identity since the 1300s and used throughout Europe since the 1600s. The Star of David was adopted by the Zionist movement in 1897 and incorporated into the design of the flag of the new State of Israel in 1948. The symbol, however, dates back to ancient times, appearing in churches built during the first century, for example.

The six pointed star is also used by the Black Gangster Disciple Nation. One of its founders was David Barksdale, who goes by the name King David. The gang claims the six points represent Love, Life, Loyalty, Knowledge, Wisdom, and Understanding.

I’ve got a MASSIVE amount of Hanukkah gelt coming to my place via prime shipping — eight nights might not be enough to eat it all! ✡🕎❄️☃️❄️ #Hanukkah
@Nymeria941, November 29, 2018
Luke 7:37 ““Do not judge others, and you will not be judged. Do not condemn others, or it will all come back against you. Forgive others, and you will be forgiven.” Enjoy your day David ✡️✝️
@TestamentsTouch, November 30, 2018

The Star of David emoji ✡️ is used throughout the year, but especially at the holiday season. It’s also used in posts about spirituality on all kinds of levels, in political posts about Israel, and in messaging about self-identify and Jewish culture.

Watching shabbat services. I will say that one benefit of covid-19 is that I was able to get to virtually attend Kabbalat Shabbat and be with my family congregation in spirt🙏🏼✡️❤️