What does 💦 Sweat Droplets emoji mean?

In sexual contexts, the sweat droplets emoji is used to depict sexual fluids. Sometimes, this emoji also represents actual sweat or water and is completely unrelated to sex.

Where does 💦 Sweat Droplets emoji come from? 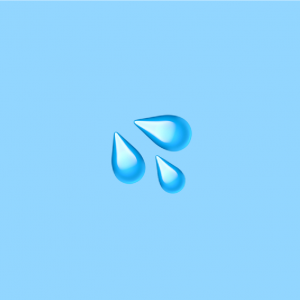 Outside of sexual situations, this emoji has a more literal meaning. As a result, the sweat droplets emoji represents other concepts, from rain droplets to actual sweat to other forms of water. Because of its use in sexual contexts, this emoji can look goofy or out of place elsewhere to those who use it suggestively. This non-sexual interpretation is used more openly and in public than this emoji’s sexual meanings, possibly because the person using it has no idea of its sexual connotations.

When she's thick and she's bad
@BaddGyalsOnly, April 19, 2017
Top 3 reasons why I have an attitude ‼️ • I miss you • I want your attention • I need some act right
@keepdalightson_, April 19, 2017
Tweet a pic filling your water bottle at a station with #WHSwaterwednesday for a chance to win $20 to Chipotle!!
@whsearthclub, April 19, 2017
SEE MORE EXAMPLES

The sweat droplets emoji is often used in sexual contexts. It’s usually paired with other emoji that resemble body parts, such as the eggplant emoji and the tongue emoji. The combination of these emoji tells a story about sex acts, particularly what the writer wants to do, or have done to them. For example, the tongue emoji paired with the sweat droplets emoji could represent oral sex. If it’s got an eggplant emoji to the left of it, this could represent male ejaculation. If it’s with a peach emoji, that might mean anal sex or an attraction to someone’s butt.

When this emoji appears out of the context of other sexually-oriented emoji, it can stand in for the concept of ejaculation or arousal, depending on the anatomy of the participants. When attached to images of people or posts discussing someone’s physical appearance, the sweat droplets emoji means that the user thinks that person is attractive. As with many other emoji, the more sweat droplets a person uses, the more emphatic it is.

Everyone has to follow @jennahottie32 for the hottest pics I've seen in a while 💦💦💦 pic.twitter.com/9ZovyhN1xG

One humorous example of just how sexually charged the emoji can be is evident in a tweet by pop star Cher, which reads “Mom had In Her when I Showed her ALL Your DAY WISHESTHANX❣.” Her followers were shocked, questioning what exactly it was that was in her mother’s eyes, though it was quite obvious that she meant tears. It just goes to show how many people associate the sweat droplets emoji with a sexual meaning.