What does 🧛 Vampire emoji mean?

The Vampire emoji 🧛  depicts a classic vampire with fangs and a black cape with a high, red-lined collar.

Where does 🧛 Vampire emoji come from? 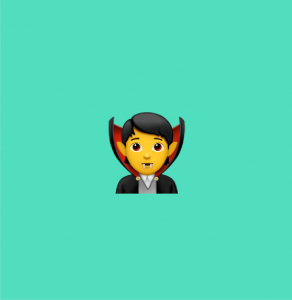 The Vampire emoji 🧛 was originally proposed alongside a variety of other staple fantasy characters, including the zombie and werewolf. The proposal cited the vampire as the second most popular fantasy character after the fairy. The fairy and zombie are also now represented as emoji: Zombie 🧟 and Fairy 🧚.

The Vampire emoji 🧛 sees frequent use referring to both vampires in general as well as specific vampire characters in popular culture, such as Dracula, Edward Cullen, the Count from Sesame Street, Count Chocula, and tons more. The emoji is also used in the context of shows about vampires, such as Buffy the Vampire Slayer.

Fright Night 🧛‍♀️ is one of my favorite vampire movies

We take Halloween serious here in Akron. We hope our spooktacular décor brightens your day. 🎃🧛 pic.twitter.com/KQ71imkbKi

Besides referring to vampires and other fantasy creatures as well as evoking a spine-tingling atmosphere, the Vampire emoji 🧛 is also sometimes used in bad vampire-related puns and jokes or to accuse someone of looking like a vampire.

Why are vampires so easy to fool?
Because they’re suckers!🧛‍♂️🧛‍♀️

Liam neeson totally looks like a vampire to me 🧛‍♂️

This is not meant to be a formal definition of 🧛 Vampire emoji like most terms we define on Dictionary.com, but is rather an informal word summary that hopefully touches upon the key aspects of the meaning and usage of 🧛 Vampire emoji that will help our users expand their word mastery.