What does 🖖 Vulcan Salute emoji mean?

Live long and prosper, friends! If you ever need to spread the love to your geekier friends, then flash a 🖖.

Where does 🖖 Vulcan Salute emoji come from? 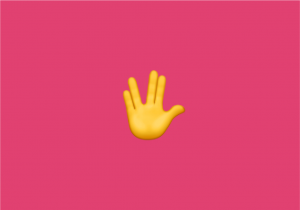 The Vulcan Salute emoji is officially called the raised hand with part between middle and ring fingers emoji. And, that’s exactly what the emoji shows across platforms. Its default hue is yellow, but skin-tone modifiers allow users to change color. It joined emoji keyboards under Unicode 7.0 in 2014.

The emoji commonly goes by the Vulcan salute because the gesture was popularized by Mr. Spock (Leonard Nimoy), who used it as a greeting in the sci-fi franchise, Star Trek. Nimoy first used the gesture in the 1967 TV episode “Amok Time,” in which Spock comes into contact with other members of his Vulcan race.

Nimoy wanted the Vulcans to have a way of greeting one another similar to human hand gestures. In an interview with New York Times, Nimoy said that his Vulcan salute was inspired by a gesture that he witnessed during a Jewish religious service when he was a boy. Jewish priests perform the actual religious gesture with both hands to form the Hebrew letter shin, ש.

The greeting Live long and prosper! has also accompanied the Vulcan salute ever since its debut in “Amok Time,” also inspired by Jewish scripture, with Deuteronomy 5:33 being the most cited inspiration for the phrase.

The Vulcan salute went memetic almost immediately after Nimoy’s first usage of the gesture. According to Nimoy, mere weeks after “Amok Time” aired, people were already using the gesture to greet him everywhere he went. The gesture was first popular among Star Trek fans but the gesture’s similarity to the popular V-shaped peace hand gesture (✌️), both in finger placement and good-willed intent, helped it catch on outside that community.

The Vulcan salute was popular long before the rise of social media, so it comes as no surprise that the emoji version took off right away after Unicode added it on June 16, 2014.

Prior to that day, users had to make due with typographical substitutes.

I am the Spock of wind turbines. 🖖
@Rottoturbine, November, 2015
Live long and prosper. Happy #StarTrekDay to all. 🖖
@DarthVader, May, 2018
The Doctor revealed his inner Trekkie 11 years ago today in Fear Her! 🖖
@bbcdoctorwho, June, 2017
SEE MORE EXAMPLES

The Vulcan salute emoji is used anytime someone wants to flash the greeting and good wishes. It can be Star Trek fans …

Happy Birthday to our Trekkie Girl Carole! Have a trektastic day! 🖖 🍸🍾

… or your non-Trekkie but self-avowed nerd friends. In this vein, the emoji can suggest anything “geeky” or “far out.”

The Vulcan salute emoji is also commonly used when tweeting about (or to) actors that appeared in Star Trek.

William Shatner is in Lowell today 🖖

While the Vulcan salute emoji is widely used when discussing anything Star Trek related, such as old episodes or new films, it can also mark content dealing with science fiction works in general.

For all who love Sci-Fi movies that really fuck with your head and concept of reality/time, watch 'Arrival' .. great movie, still confused as tits 10/10 wont sleep tn 👍🖖