What does 👩 Woman emoji mean?

The Woman emoji 👩 depicts a generic adult woman. It’s sequenced with other emoji to show professions, like the Woman Firefighter 👩‍🚒, and to create diverse family and relationship emoji, like Kiss: Woman, Woman emoji 👩‍❤️‍💋‍👩.

The Woman emoji 👩 is often used with emoji such as the Female Sign emoji ♀ to celebrate International Women’s Day, which falls on March 8 each year.

Where does 👩 Woman emoji come from? 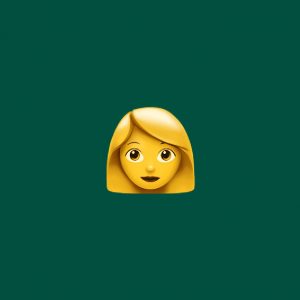 On some platforms like Apple and Twitter, the default Woman emoji 👩 has blonde hair. On others, such as Google and Facebook, she is a brunette. Her default form has an ethnically neutral yellow face, though users can select different skin tones to change the color of her face and hair for their desired representation.

Don’t confuse her with the Girl emoji, which looks like the Woman emoji 👩 but with the hair pulled into pigtails: 👧.

While the Woman emoji 👩 is available as a stand-alone emoji, programmers have paired her code with other emoji to create a wide range of female forms of existing emoji, from the Woman Farmer 👩‍🌾 to Woman Golfing 🏌️‍♀️ emoji. For instance, the Woman Mechanic emoji 👩‍🔧 is a combination of of the Woman emoji 👩 and the Wrench emoji 🔧, which many platforms have morphed into a single emoji.

This emoji magic extends to depictions of families and relationships, providing greater diversity than the traditional mother-father or husband-wife configurations. For example, the Family: Woman, Woman, Girl emoji 👩‍👩‍👧, uses two Woman emoji 👩 and a Girl emoji 👧 to depict two female parents who have a daughter, again transformed into a single image by newer platforms.

My mom is my absolute best friend 👩‍👧
@kassiebaca199, December 29, 2017
Aw another fantastic @WorldBookDayUK celebration. I really am so fortunate to work with the most amazing children and teachers every day! 👏📚👩‍💻👩‍🏫 @MissJ_Heolddu @APHeolddu
@HeoldduEnglish, March 5, 2021

On social media or in texts, the Woman emoji 👩 is occasionally used alone to signify an adult woman and with other person-based emoji, like Man 👨 and Girl 👧, to talk about family.

She appears in romantic relationships as well, such as the Kiss: Woman, Woman emoji 👩‍❤️‍💋‍👩.

I proclaim 2017 the year of Parker & Kristina Supercouple 💖👩‍❤️‍💋‍👩💖 pic.twitter.com/MAKz1OTpGZ

The Woman emoji 👩 is very often paired with other emoji to take pride in accomplishments, signal professional identity, or promote gender diversity in society. The emoji is also used to mark International Women’s Day, which has been commemorated since 1911. Held on March 8, the day gives visibility to issues of women’s equality and gender parity, while also bringing attention to charities and women’s achievements.

Many variations of the Woman emoji 👩 exist. For example, the Woman Student emoji 👩‍🎓 is a combination of the Woman 👩‍ and Graduation Cap 🎓 emoji, although it still displays separately on older software.

The Woman Teacher emoji 👩‍🏫 is a combination of the Woman 👩‍ and School 🏫 emoji.

Congratulations to our 2017-2018 teacher of the year Mrs. Jemi Thompson 👩‍🏫👍🏻🦈. You work tirelessly for your UNITY and math students @CNUSD pic.twitter.com/K2QW6QaGvn

When the Woman emoji 👩 is placed next to the Laptop emoji 💻, she is a Woman Technologist 👩‍💻.

Finally, the Woman emoji 👩 is a very popular stand-in for a mother on Mother’s Day, often paired with a Child emoji 🧒 and Heart emoji or Bouquet emoji 💐.

She is there every step of the way.❤️👩‍👦

This is not meant to be a formal definition of 👩 Woman emoji like most terms we define on Dictionary.com, but is rather an informal word summary that hopefully touches upon the key aspects of the meaning and usage of 👩 Woman emoji that will help our users expand their word mastery.