Everything After Z by Dictionary.com
Previous Word:
Next Word: 8=D

Found out today I passed my final ever University essay. 🙌 After these past 3 years, in September I will officially be a nurse.👩‍⚕️🎉✨
@lynseymarieCYP, July, 2018
Good morning. Early start for me!!😢Off to start my nursing duties👩‍⚕️. Gotta keep my patients well. 😊Another day closer to my goal. #XRP 😄

The woman in the health care emoji sports a stethoscope and lab coat, just like her male peers. Health care is one of the only fields where a woman might earn more, on average, than a man in the same position.
Alex Janin, TakePart, May, 2016

The woman healthcare worker emoji was pioneered in May 2016 by a group of Google employees proposing 13 new emoji featuring women in professional roles and their male counterparts. They wanted to “better reflect the pivotal roles women play in the world.”

In their proposal to Unicode, the nonprofit consortium that standardizes computer language, the group wrote: “Our proposal is to create a new set of emoji that represents a wide range of professions for women and men with a goal of highlighting the diversity of women’s careers and empowering girls everywhere.”

In addition to two health care workers—one in a lab coat and with stethoscope for a doctor and one with a medical mask and in scrubs for a nurse—they proposed a woman teacher, coder, rockstar, food service worker, among others.

These emoji glass ceiling breakers were inspired by Amy Butcher’s March 2016 New York Times op-ed “Emoji Feminism.” In it, she complained about the lack of emoji depicting strong, successful women, as they were otherwise represented in emojidom as princesses 👸, brides 👰, and, on most platforms, salsa dancers 💃.

Much to everyone’s surprise, in July 2016 Unicode approved (under Emoji 4.0) almost all of the proposed professional women emoji. It was a surprise not because Unicode is known for being sexist per se, but because the consortium had just announced their list of newly approved emoji the previous month. They must have been feeling the pressure.

Unicode, though, only approved one of the two healthcare workers, the one with the stethoscope, which became our woman health worker 👩‍⚕️, as there was already a face with medical mask emoji 😷, albeit gender-neutral.

Across platforms, the woman health worker emoji shows the vendor’s default woman emoji (👩) in a white lab coat with a stethoscope around her neck, as shown in the screenshot from Emojipedia below. 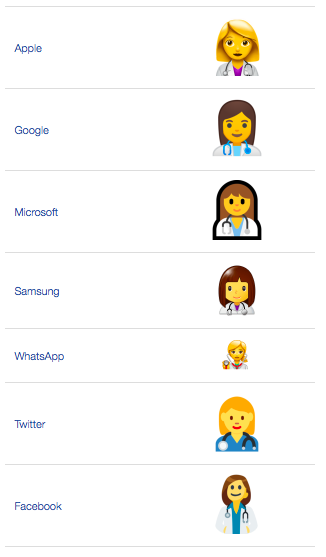 True to the intention of the emoji, many women in the healthcare profession use the woman health worker emoji. It is often used by women to mark a milestone on the path to a healthcare career: admittance to a school, graduation, or passing various certifications, for instance.

Hospitals will use the emoji to celebrate their hardworking employees, especially on May 11, International Nurses’ Day.

Watch Will explain below 👇 pic.twitter.com/eWTymBCm1j

Sometimes people will use the woman health worker emoji to punctuate a tweet that is about a health concern, whether it be public health …

Science passages frequently come up on the #TOEFL. Get test-ready and learn about a contributing factor to a common health issue 👩‍⚕️ reported by @TheAtlantic: A Frightening New Reason to Worry About Air Pollution https://t.co/iztRrHadcR pic.twitter.com/hrCUyWsQGj

… or just playing doctor at home.

Pet-owners also use the woman health worker emoji to announce their furry friends are safely back from the vet, as there isn’t a vet emoji yet. Time for a new proposal to Unicode? You heard it here first.

Back at UC Davis for a CT scan and to have some dead teeth removed. Everyone here is so nice and takes such great care of me 😸 #healthcheck #👩‍⚕️ #sammiethekitten #littlesister #adoptdontshop #kitten #rescuecat #caaaat #catsofinstagram #instacat #meow #katt #hermes_n_sammie