What does  🥴 Woozy Face emoji mean?

‘Scuse meeeeeeessssss, had have had you seen [hic] thith new emoji?

The woozy face emoji means you’ve had a few too many, or many too many. It can also mean that the user is tired, overly emotional, or plain confused. Or, according to a popular meme, it represents the dumb face men make when they try to look sexy in a photo.

Where does 🥴 Woozy Face emoji come from? 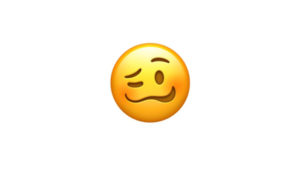 Originally called “Face With Uneven Eyes and Wavy Mouth” in Unicode, this emoji entered the scene in 2018.

The woozy face emoji is our friend the yellow smiley emoji after getting hammered. The smile is replaced by a wavy, partially open mouth. One of its eyes are squished as if it’s half-winking or squinting. The emoji looks slightly different from platform to platform, but it always looks pretty wasted. 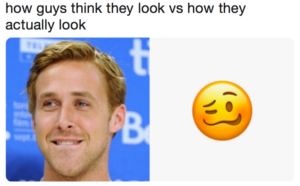 When it first came out, the woozy face emoji baffled the internet and bewildered users crowdsourced ideas for what it meant.

Can someone explain wtf this emoji is ? LMAO pic.twitter.com/whou74Wcor

True to form, Twitter offered some super gross ideas. People speculated it’s the face you make when you are trying to push out a fart, when you burp and blow it out the side of your face, or when you have–or are about to have–diarrhea.

A host of sexual meanings were floated, including  the face you make when you come or when something is both pleasurable and a little uncomfortable.

Because of the emoji looks as though it’s making a “stupid face,” it’s also been used to convey self depreciation–like when you forget to plan for the obvious things…

Guess who has to be up in 1 hour to go to the airport and is still awake…. This fucking idiot 🥴

Megan Farokhmanesh of The Verge says it’s this emoji is a stand in for  “the drunk weirdo at the bar.” She writes, “At 2AM, this is the emoji that will slide up next to you, try to make conversation, and promptly spill a beer in your hair.”

And then Miles Klee of Mel Magazine observed,”Woozy Face is me. It’s how I’ve appeared in roughly 80 percent (conservative estimate) of posed photos taken over the last decade.”

Now that the emoji’s novelty has worn off, people mostly use it to express that they are having strong, negative emotions such as stress. Because life is struggle.

The first five days after the weekend are always hard. 🥴

This is not meant to be a formal definition of 🥴 Woozy Face emoji like most terms we define on Dictionary.com, but is rather an informal word summary that hopefully touches upon the key aspects of the meaning and usage of 🥴 Woozy Face emoji that will help our users expand their word mastery.