The zipper-mouth face emoji depicts a face and two eyes, with the mouth appearing as a silver zipper, complete with a dangling zipper pull.

It’s used for a number of things, ranging from “not a lot of talking going on here” to “don’t talk about it.”

Where does 🤐 Zipper Mouth Face emoji come from? 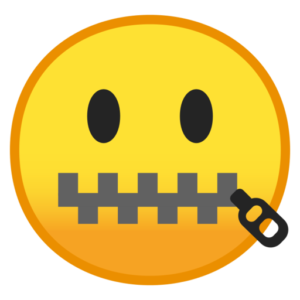 An early Google version of the hushed face emoji 😯 (which looks more surprised than hushed, but that’s the name of it) featured a face with a zipper mouth. It was deleted with Android 6.0.1.

It’s often used as a signal to shut up … whether given to someone else or for yourself.

This emoji seems to confuse people … but, most often, the idea is along the lines of keeping your mouth shut, perhaps as a filtering device or in keeping a secret (as in, “what happens in Vegas, stays in vegas”):

Or, as a philosophical musing:

We ain’t doing to much talking 😴🏀🤐💉 pic.twitter.com/5RNVijq1F1

that’s why her hairs so big it’s full of secrets 🤐 pic.twitter.com/d24EOfV5yj

Sometimes, the message is, “Someone should have spoken up!”

some of y’all are like “the only person who can give me riding advice is my trainer” when your stirrups are two holes too long, which negatively affects your riding, and your so called trainer has never said a word about it 🤐

It has potential for a number of creepy uses because it’s kinda creepy looking:

🤐 if anyone still wants makeup done dm me! pic.twitter.com/GW395pkNZp

And, sometimes we’re not sure why it’s being used. Spida though!

DONOVAN MITCHELL WITH THE ACROBATIC UP AND UNDER 🕷🔥🤐