What does AOC mean?

AOC are the initials commonly used to refer to Alexandria Ocasio-Cortez, a Democratic congresswoman for New York City.

Where does AOC come from? 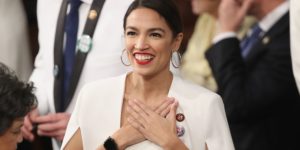 Alexandria Ocasio-Cortez—widely referred to by her initials AOC, including on Twitter as @AOC—came into the spotlight in January 2018, when she upset longtime incumbent Joe Crowley in the Democratic primary for New York’s 14th congressional district, which covers parts of the Bronx and Queens in New York City.

Of Puerto Rican descent, AOC won that seat in November 2018 to become the youngest-ever woman elected to Congress. AOC continued to make headlines through her effective use of social media to engage people across the nation. A member of the Democrat Socialists of America, AOC has promoted very progressive policies concerning climate change (sponsoring the Green New Deal) and taxes (a 70% marginal tax rate for incomes over $10 million).

As inspiring as many on the left find her, many of the right are infuriated—or shall we say challenged—by her powerful and outspoken brand. In January 2019, for instance, a Twitter user attempted to smear her by sharing a video of her from college where she dances out a scene from The Breakfast Club. The effort backfired, however, as the video only made her more likable and relatable, boosting her profile.

In April 2019, AOC was criticized for “verbal blackface” in a speech that incorporated elements of Black English, but linguists identified it as code-switching thanks to her urban Latinx background.

I hear the GOP thinks women dancing are scandalous.

Wait till they find out Congresswomen dance too! 💃🏽

Have a great weekend everyone :) pic.twitter.com/9y6ALOw4F6

I am not an #AOC fanboy. However, what she said about what is at the heart of the [quintessential] American, I couldn't agree more! #TheAmericanWorker
@laurelton25, April, 2019
... not all of the chatter about Ocasio-Cortez has been so flattering, especially on the right. AOC bashing among some conservative circles and media outlets has become near obsessive. Where she lives, what she wears, how much money she has have all been points of discussion.
Emily Stewart, Vox, March, 2019 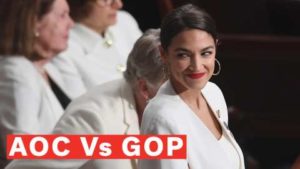 While referring to a person by their initials can be informal or even disrespectful, AOC is a common way to refer Alexandria Ocasio-Cortez by left, right, and center both in the media and popular culture in speech and online.

These uses, of course, may be loving …

It is refreshing to hear an elected representative @AOC acknowledge that she represents ppl who were / are incarcerated in her district.

And it's depressing to think this is such a breath of fresh air. It should be normal. #prisonindustrialcomplex https://t.co/3NEQdy1g2z

… but they also may be spiteful.

Donald Trump will be skipping the White House Correspondence Dinner and will instead invite 100 racist white men and women in MAGA to Golden Corral to enjoy a nice positive dinner with “Lock Her Up” and “AOC Sucks” chants.

This is not meant to be a formal definition of AOC like most terms we define on Dictionary.com, but is rather an informal word summary that hopefully touches upon the key aspects of the meaning and usage of AOC that will help our users expand their word mastery.