Who is Hidilyn Diaz?

Hidilyn Diaz is a weightlifter who became the first-ever athlete representing the Philippines to win a gold medal. Diaz won the medal in the women’s 55 kilogram (121-pound) weightlifting category during the Summer Olympics in Tokyo in 2021.

Why is Hidilyn Diaz important? 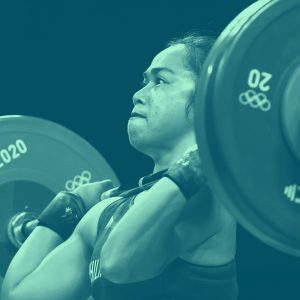 Hidilyn Diaz is known for winning the first-ever gold medal for the Philippines and for setting multiple Olympic weightlifting records.

Before her gold medal win, Diaz had represented her home country of the Philippines in multiple Olympic Games, first competing in the 2008 Summer Olympics in Beijing. In 2016, Diaz won the silver medal in the women’s 53kg (115 lb.) weightlifting category at the Summer Olympics in Rio de Janeiro.

Diaz’s gold medal win in 2021 propelled her to national hero status in the Philippines, garnering widespread praise, including congratulations from prominent government officials. It was also announced that Diaz would be rewarded with 33 million pesos (about $660,000) and a house for her win.

Gold! Thank you, Hidilyn Diaz, for lifting our nation's spirit, at a time when we need it the most!
@gideonlasco, July 26, 2021
Weightlifter Hidilyn Diaz made history Monday, winning the Philippines' first gold medal at the Summer Olympics in Tokyo. The country had been trying to reach the podium's top spot for nearly 100 years: It sent its first Olympic delegation to Paris for the 1924 Games.
Bill Chappell, NPR, July 26, 2021

How is Hidilyn Diaz discussed in real life?

Our first ever GOLD OLYMPIC MEDAL brought home by a strong and amazing woman!! Thank you, Hidilyn Diaz! We are so proud of you! Congratulations!! ❤️🇵🇭

Hidilyn Diaz, Nesthy Petecio, and Margielyn Didal – their feats in the Tokyo Olympics are proof of the might and strength of the Filipina. Thank you for inspiring women and young girls to be as strong as you are. Who run the world? 💪🏻

Hidilyn Diaz ❤️💯🏅🏆 thank you for carrying us all!!!

This is not meant to be a formal definition of Hidilyn Diaz like most terms we define on Dictionary.com, but is rather an informal word summary that hopefully touches upon the key aspects of the meaning and usage of Hidilyn Diaz that will help our users expand their word mastery.