Everything After Z by Dictionary.com
Previous Word Guava Juice
Next Word Jocelyn Flores

What does Jack the Ripper mean?

Jack the Ripper is the name given to a notorious and long sensationalized serial killer active in London’s West End in the fall of 1888.

Examples of Jack the Ripper

“An Amazon search spits back nearly 4,500 items, IMDb returns 119 TV episodes or movies, but even those numbers don’t account for the subtly titled video games, websites, stage plays, operas, paintings, radio dramas, songs, costumes, or various Etsy crafts that seek to capture that ‘Jack the Ripper aesthetic.’”
Rick Paulas, “The Jack the Ripper Content Economy,” The Awl (October 31, 2016)
“In addition, this is not the first time that DNA evidence has supposedly cracked the case. American crime novelist Patricia Cornwell asserted that DNA samples found on the taunting letters sent by Jack the Ripper to Scotland Yard matched those of post-Impressionist painter Walter Sickert.”
Christopher Klein, “Has Jack the Ripper’s Identity Been Revealed?” History.com September 9, 2014
“There are an awful lot of people, particularly in the States, who don't believe Jack the Ripper actually existed. They think he is a fictional character along with Frankenstein and Dracula.”
Paul Begg, reported by Finlo Rohrer, “Why are we obsessed with Jack the Ripper?” BBC News (November 26, 2004)
SEE MORE EXAMPLES

Where does Jack the Ripper come from? 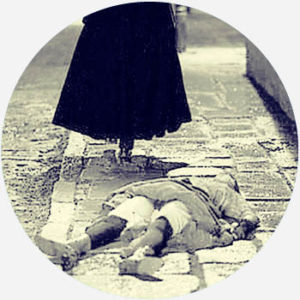 London’s Whitechapel neighborhood saw 11 women murdered in 1888. At least five of them, Mary Ann Nichols, Annie Chapman, Elizabeth Stride, Catherine Eddowes, and Mary Jane Kelly—are commonly thought to have been killed by the person now known as Jack the Ripper. The victims were all prostitutes and were mutilated by the killer.

Early newspaper reports referred to the unknown killer as simply “the Whitechapel Murderer” or “Leather Apron,” based on the description of a suspect wanted by police.

Police and newspapers received hundreds of letters claiming to be from the Whitechapel Murderer. One of the most famous, received on September 27, was signed Jack the Ripper. The author of the letter also dismissed the notion that the suspect known as Leather Apron was the real killer. Police received another letter on October 1, in similar handwriting and also signed Jack the Ripper.

George Lusk, the head of the Whitechapel Vigilance Committee formed to patrol the London district during the grisly murders, received a package on October 16 containing a human kidney, and a letter which opened “From Hell.” This letter was in different handwriting from the others, but one of the victims, Eddowes, was found with one of her kidneys removed. William Sanders, a physician present at Eddowes’s post-mortem examination, told the Manchester Evening News on October 9 that the kidney sent to Lusk was not Eddowes’ but may have been a hoax perpetrated by a medical student. There is still ongoing debate as to which, if any, of the letters were really penned by the killer.

Newspapers at the time reported in detail on the murders, often sensationalizing the story and speculating on the identity and motive of the killer. The press seized on and popularized the name Jack the Ripper.

The murders immediately became fodder for fiction. A novel involving the murders, The Curse on Mitre Square, was published in October 1888, the same month the “From Hell” letter was received and before the last victim, Mary Jane Kelly, had been killed. Two nonfiction books, The History of the Whitechapel Murders and Leather Apron; Or, the Horrors of Whitechapel, London, were published that same year.

Jack the Ripper would soon be invoked by the budding film industry. Alfred Hitchcock’s 1926 silent movie The Lodger: A Story of the London Fog was based on a 1913 novel (itself expanded from 1911 short story), inspired by the Whitechapel murders. A 1944 remake made the Jack the Ripper connection more explicit. 1959 saw the release of a movie titled Jack the Ripper and 1966’s A Study in Terror featured Sherlock Holmes trying to solve the Ripper murders.

In 1970, crime magazine The Criminologist published “Jack the Ripper — A Solution?” The author, Thomas E.A. Stowell argued that Prince Albert Victor, second in line to the throne, had been the Ripper. The theory was widely discredited by most, but picked up by Stephen Knight, who fleshed out the theory in his book Jack the Ripper: The Final Solution, which proposed a conspiracy between Freemasons and the royal family. Alan Moore used Knight’s theory as the basis for his comic book series From Hell, although Moore later noted he did not take Knight’s account as fact but as inspiration.

Colin Wilson, who wrote 1987’s Jack the Ripper: Summing Up and Verdict coined the term Ripperologist to describe those who study the Whitechapel murders. Incidentally, that same year, the types of speculations made by Knight and others were satirized in a segment of the comedy movie Amazon Women on the Moon, in a parody of paranormal investigation TV shows, claiming that Jack the Ripper was actually the Loch Ness Monster.

Speculation about the killings remains popular. Three periodicals dedicated to Ripperology were founded in the 1990s: Ripperana in 1992, Ripperology in 1994, and Ripper Notes in 1999. Modern investigators have even tried to obtain DNA evidence from objects associated with the crimes, including the letters.

In a 2006 BBC Poll, Jack the Ripper was voted the worst Briton in history.

This is not meant to be a formal definition of Jack the Ripper like most terms we define on Dictionary.com, but is rather an informal word summary that hopefully touches upon the key aspects of the meaning and usage of Jack the Ripper that will help our users expand their word mastery.