What does Julien Solomita mean?

Julien Solomita is a massively popular vlogger, web-content creator, and producer known for his personal YouTube videos and gluten-free recipes.

Where does Julien Solomita come from? 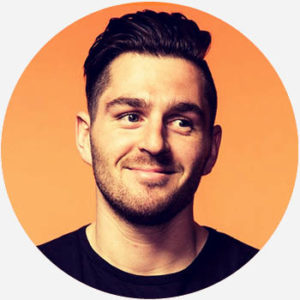 Julien Solomita was born in 1992 in Northern California. While working as a programmer for AMP Radio (KAMP-FM) in 2012, Solomita began posting vlogs of his daily life on YouTube and Vine. His early videos focused primarily on weightlifting and journaling.

In 2014, Solomita began dating fellow YouTuber Jenna Marbles (Jenna Mourey). The couple lives together in Los Angeles, and they host a podcast together. Solomita runs a production and travel company called Waffsicle, for which he also posts videos (called Last Minute Trips).

Solomita suffers from Celiac Disease, which means he is allergic to gluten. He often posts recipes of gluten-free dishes and raises money for organizations, including the Celiac Disease Foundation.

It's the wanderer's dream. Throw a dart at a map, book the trip and go. For creators Julien Solomita and Collin Duddy, that dream is a reality in their new original web series, "Last Minute Trips.
Kylee Sipowksi, Odyssey, March 2017
i’ve been watching jenna marbles and julien solomita videos recently and i would like to publicly announce that they are the reason behind my first laugh-so-hard-you cry kind of laugh of this year. god bless
@mattcohen4fake, 2018
Early December, I commented on a random Reddit post how well-done Julien Solomita's (YouTuber Jenna Marbles' long time boyfriend) vlogs were and how much I loved them. He saw it, screenshotted my comment and posted it on his Twitter on December 12th to thank me and I literally just found out about it. Guys. Julien Solomita SAW my comment, and THANKED ME on Twitter..... Guys....
Kristen Morgan, Facebook, 2018
SEE MORE EXAMPLES

Julien Solomita is principally used in reference to the person or his work as an internet personality, which is especially popular with young adults.

His celebrity, and much-admired relationship to Jenna Marbles, has inspired some fanfiction.

This is not meant to be a formal definition of Julien Solomita like most terms we define on Dictionary.com, but is rather an informal word summary that hopefully touches upon the key aspects of the meaning and usage of Julien Solomita that will help our users expand their word mastery.