What does Phil Lester mean?

Phil Lester is a massively popular British YouTube star, author, and radio/TV host. He has been producing online content since 2006.

Where does Phil Lester come from? 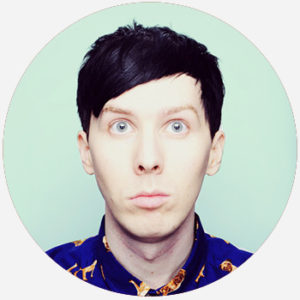 Phil Lester was born in 1987 in Rawtenstall, England. His earliest online videos were posted in 2006, when Lester was 19 years old, and they included references to his family and high school (Rawtenstall Grammar School in Bacup).

Lester’s YouTube channel, AmazingPhil, has been active since 2006, and, as of 2018, has over four-million subscribers. His videos include vlogs about his personal life, humorous segments, and advice for his viewers.

Conscientious of his younger audience, Lester refrains from swearing in his videos, and he is often quoted as saying, “It’s a good thing to be strange; normalness leads to sadness.”

Lester has been credited with creating the YouTube sensation “The 7 Second Challenge,” which was later developed into an app. The challenges task players with performing funny activities, exercises, or thought experiments.

Lester has collaborated with his best friend and fellow YouTuber Dan Howell for the last seven years, and the two of them live together in London. Their collaborative YouTube projects include a gaming channel, where they discuss video games, the April Fool’s channel, where they posted a video of a craft project for April Fool’s Day that prompted the internet memes: squareflakes and Don’t cry, craft. The pair also run the Super Amazing Project, a show covering viewer submissions in response to Lester’s paranormal-focused show, My Damn Channel. They have also co-written a book, The Amazing Book Is Not on Fire (TABINOF).

In addition to YouTube, Lester is active in radio. He hosted BBC Radio 1’s “Internet Takeover” with Howell until April 2016.

He is frequently seen presenting at internet-related events or creating online art to raise money for charity. Lester has also appeared in several films, including Faintheart, Big Hero 6, and The Lion Guard.

I took a snapshot of Phil Lester on YouNow! COME SEE IT LIVE!
Aaya Perez, Facebook, January 2013
phil lester is the definition of happiness and beauty
@astronomyboypml, January 2018
How much does Phil Lester make from his primary Youtube channel? Considering the fact that he receives ~300,000 views a day, it’s not surprising to know that he generates upwards of $450 per day from the ads displayed on his videos (e.g. approximately $165,000 a year).
Brooke Carter, Gazette Review, January 2018
SEE MORE EXAMPLES

Lester is well recognized and often mentioned online, especially within the YouTube community, where he is very popular with young adults.

His name is often used in reference to the 7 Second Challenge, the squareflakes and Don’t cry, craft! memes, and Phandom (Phil and Dan fandom) fanfiction written by shippers of Phil Lester and Dan Howell.

This is not meant to be a formal definition of Phil Lester like most terms we define on Dictionary.com, but is rather an informal word summary that hopefully touches upon the key aspects of the meaning and usage of Phil Lester that will help our users expand their word mastery.