What does Sex Pistols mean?

The Sex Pistols were an influential—and controversial—English punk rock band active in the late 1970s.

Where does Sex Pistols come from? 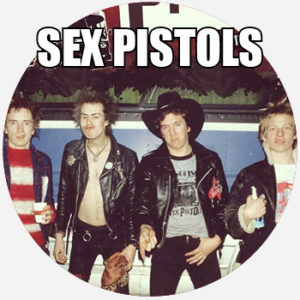 The Sex Pistols were formed in 1975 by Malcolm McLaren, who ran an “anti-fashion” boutique in London called Sex with his then-girlfriend, Vivienne Westwood. McLaren and Westwood’s clothes, deliberately ripped and provocative, helped establish the aesthetic of the punk movement—as did his band.

Headed by singer Johnny Rotten (John Lydon), the Sex Pistols featured a loud, fast-paced, and raw sound with angry, iconoclastic lyrics, a confrontational public presence, and a nihilistic worldview. The Sex Pistols, along with other early punk artists like the New York City-based Ramones, rejected the peace-and-love idealism they saw in 1960s hippie music and the bourgeois self-involvement of 1970s mainstream culture.

The Sex Pistols first made waves with the debut of their 1976 single Anarchy in the UK, which helped land them a notorious and profanity-laden interview on an English news program. Just in time for the Queen Elizabeth II’s Silver Jubilee in 1977, the Pistols (as the band name is sometimes shortened) released a song called “God Save the Queen,” which features some of their most defining, and defiant, lyrics:

God save the queen, the fascist regime

They made you a moron, potential H-bomb

God save the queen, she ain’t no human being

There is no future in England’s dreaming

Though the song was banned from the BBC and other airwaves, it still reached number two on the official British charts, which famously left the spot blank rather than acknowledge the track title—and the band’s success.

Later in 1977 the Sex Pistols released their only proper album, Never Mind the Bollocks, Here’s The Sex Pistols. A week after its debut, it was on top of the UK’s Official Albums Charts, despite objections to the word bollocks, British slang for “testicles.” The album, since rated as one of the greatest rock albums of all time, also marked the debut of another punk celebrity, Sid Vicious (John Simon Ritchie).

The band’s outward turbulence also hit closer to home: the Sex Pistols split up in 1978. Nevertheless, they influenced countless bands after them and did reunite over the following decades for some well-received tours. Their punk attitude was still in full force, however, when they refused to show up for their 2006 induction into the Rock and Roll Hall of Fame, calling the institution, among other insults, “a piss stain.” Sex Pistols frontman John Lydon also turned some heads in 2017 when he expressed support for Brexit, Donald Trump, and the Queen, whose very derision of first shot him into the public spotlight.

“Ahh there's nothing like listening to some Anti-establishment music to liven up this Monarchist weekend. #SexPistols”
Jamie Jobanputra @SwiftJams Twitter (June 1, 2012)
“We’re intrigued by the way that what sounds and feels like ‘freedom’—like the music of the Rolling Stones, the Stooges, Sex Pistols, for instance—can conceal the seeds of domination.”
Simon Reynolds and Joy Press, The Sex Revolts: Gender, Rebellion, and Rock 'n' Roll (1996)
“There never was a punk movement. There was the Sex Pistols and there was the rest. The Sex Pistols ARE punk; the rest are ‘punk rock’. Big difference…”
“Sex Pistols Bio,” Sex Pistols (Official Website) (March 22, 2017)
SEE MORE EXAMPLES

While Sex Pistols is usually a proper noun referring to the band, it’s also been employed as a metaphor for something that embodies the punk spirit. For instance, when discussing his support of Donald Trump, Lydon agreed with a journalist’s suggestion that the president is a “political Sex Pistol.” Slang and other references have punned on the band name by using sex pistol to describe genitalia and sexual acts. The band has also inspired cocktails and ice cream.

This is not meant to be a formal definition of Sex Pistols like most terms we define on Dictionary.com, but is rather an informal word summary that hopefully touches upon the key aspects of the meaning and usage of Sex Pistols that will help our users expand their word mastery.