What does assless chaps mean?

Guess what … saying assless is redundant here, because chaps by definition don’t have a seat. Just so you know.

While chaps were originally worn around the waist to protect the legs of horseback riders, assless chaps are associated with the LGBTQ community as a kinky or provocative article of clothing, which leave the butt and sometimes crotch exposed.

Where does assless chaps come from? 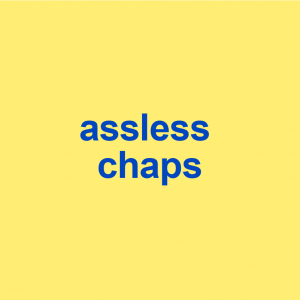 Chaps, shortened from the Spanish chaparreras, originated as a type of leather leg protector used by Mexican and American cowboys in the 19th century.

Worn over trousers, chaps don’t include a crotch or seat, originally to aid horseback riding. Many varieties of the leg-wear exist, including chinks, batwing chaps, shotgun chaps, and various adaptations for motorcyclists and chainsaw workers.

Unlike work chaps, these subcultures donned the leggings for the kink, sexual play, or social statement achieved by the exposure of the buttocks, thighs, and in some cases crotch.

At the 1991 MTV Video Awards, Prince memorably swaggered around on stage in an assless yellow jumpsuit while performing his song “Gett Off.” The media has popularly described his outfit as assless chaps.

overheard at @Espressoamano: “oh shit, pride is happening soon, I gotta buy assless chaps”
@theonesean, May, 2018
my uncle used to use the response "assless chaps and a feather boa" much more then I can remember why
@celineherbez, May, 2018
The chap is no longer just a simple utilitarian garment and its association with freedom of expression lives on in gay subcultural groups. Also, when worn by archetypes of the queer community, such as “leather daddies,” the chap represents pride in minority status and evading the mainstream.
Alansquinn, Fashion & Power 2014 (academic blog), April, 2014
SEE MORE EXAMPLES

Equestrians and motorcyclists use chaps practically, while assless chaps are especially connected to the LGBTQ community as an article often worn for provocation or fun and as a nod to their historical place in their marginalized subculture.

Some people, however, use assless chaps to disparage gay people, sadly. Not cool.

This is not meant to be a formal definition of assless chaps like most terms we define on Dictionary.com, but is rather an informal word summary that hopefully touches upon the key aspects of the meaning and usage of assless chaps that will help our users expand their word mastery.