What does box braids mean?

Where does box braids come from? 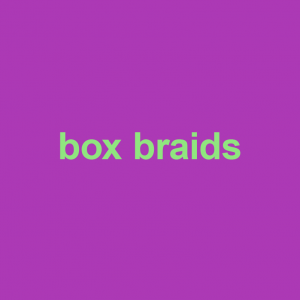 Braided hair goes as far back as West African culture in 3,500 BCE. Braid patterns and styles were originally linked to a person’s tribe, age, status, and religion, among other things. The act of braiding was also a form of social bonding.

Box braids, as a specific hairstyle, have been traced back at least 3,000 years ago in ancient Egypt. The tight, braided style was, apparently, a way for Egyptian women to incorporate extensions that masked graying hair on top of making it appear longer.

In the modern era, box braids saw a major boost in popularity in 1993 with the release of the film Poetic Justice. The star of the film, Janet Jackson, was heavily featured in promotional images with her hair styled in long box braids. The term box braids also came into prominence in the 1990s.

In 2012, several prominent black celebrities, including Beyoncé, were seen wearing box braids, leading to a renewed surge in search interest. Their popularity has continued since then, as it’s become increasingly en vogue for black women to wear their hair in more natural styles as opposed to adhering to Eurocentric beauty standards.

In addition to its aesthetic appeal, box braids are used as a way to protect Afro-textured hair against split ends and damage from heat and humidity. Many salons offer box braiding services from stylists with specialized experience with this particular hair texture, as braids that are too tight or done wrong can cause pain and hair breakage.

I’m in the mood to have super box braids but not pay someone to do it but also not do it myself ...do you hear me?
@DJShay_, April, 2018
If you think about it, box braids were the first acceptable hair extension process, when getting weaves were still taboo.
Shirea L. Carroll, Essence, July, 2010
So, when a hairstyle like box braids or cornrows becomes trendy for mainstream white consumers only because a white model or celebrity wearing it makes it acceptably fashionable, then such a practice erases the cultural and historical origins of that style. It trivialises [sic] that culture and reduces it to a fashion fad.
Jennifer Whitney, The Conversation, May, 2017
SEE MORE EXAMPLES

Box braids are especially used by black hairstylists, everyday black persons with the hairstyle, and fashion and beauty media. They may also be referenced with respect to the larger role of hair, including the historically maligned natural black hair, in broader cultural commentary and publications.

To box braid is sometimes used as a verb for fashioning one’s hair into box braids. Both men and women can wear box braids, though the hairstyle is more associated with women.

Given its history, non-black persons wearing box braids may be accused of cultural appropriation.

This is not meant to be a formal definition of box braids like most terms we define on Dictionary.com, but is rather an informal word summary that hopefully touches upon the key aspects of the meaning and usage of box braids that will help our users expand their word mastery.