What does emo hair mean?

Emo hair is the name for a jagged, eye-covering, banged hairstyle stereotypically associated with the emo music subculture, prominent among white, suburban youth in the early 2000s and 2010s.

Where does emo hair come from? 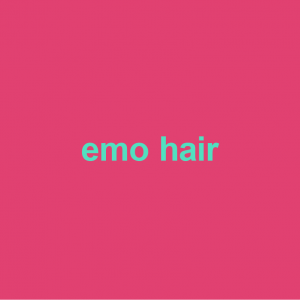 Emo music began as an offshoot of punk music in the 1980s. Originally called emocore, emo is short for emotional, a defining aesthetic of the guitar-based rock music. Instead of the outwardly aggressive, anti-establishment sound and lyrics of punk, emo features a more pop-music sensibility and confidential lyrics about an artist’s inner emotions, particularly of angst and turmoil.

Originally an underground scene, emo music went mainstream in the early 2000s on the heels of influential bands like My Chemical Romance, Panic! At the Disco, Fall Out Boy, and Paramore. Some people in these bands fashioned themselves in what’s now stereotyped as the emo look, wearing dark clothing, accessories, makeup, nail polish, and some piercings. The hairstyle became notable enough to be called emo hair. It variously features jagged bangs and layers shifted over one eye, black hair dye, red highlights or streaks, and a back-combed look. The length is medium to long, especially on the sides or back. Others dye their emo hair in neon colors or in patterns such as cheetah spots. Gerard Way of My Chemical Romance and Lisa Origliasso of The Veronicas wore iconic instances of emo hair in the 2000s.

The phrase emo hair appears on Urban Dictionary by 2005 and was common enough to be included in slang dictionaries by 2009. In 2007, after the release of Spider Man 3, a GIF of Peter Parker (Tobey Maguire) flipping his long bangs, reminiscent of emo hair, became a meme. This move is often called the emo hair flip, deriding the way so-called “emo kids” commonly have to flip their hair out of their eyes.

In the 2000s, YouTube videos of emo fans showing others how to style their hair were extremely popular (e.g., “How I Style My Emo Hair,” “How to Cut Emo Hair”). In the subculture, attaining the emo look is an important part of self-expression, on par with the music that inspired it.

i have true emo hair today it covers my eyes (xdd) ))
@miserabilities, March, 2018
While emo hair focused on big bangs that often obscured half of your face, scene kid hair had to rest at least three inches above the top of your head.
Gina Tonic, Bustle, July, 2016
Pete may not have had the long beautiful ombre hair that Jared had (RIP Jared’s Jesus hair) but Pete likes to experiment with different hair colors. Everyone remembers his black emo hair with the piece-y bangs but he’s recently been rocking platinum blonde hair before he ditched it for his new pink color.
Heather Cichowski, The Gloss, March, 2015
SEE MORE EXAMPLES

Emo hair is not bound by gender; it is the general hairstyle sported by diverse people in the subculture.

The phrase is still used literally and earnestly, with fashion articles instructing people how to get emo hair at home or the salon. In 2012, Time Magazine discussed suspected, and later debunked, links between the emo haircut and lazy eye.

Emo hair, however, is also used to disparage the appearance and attitude of “emo kids.” Among more hardcore emo music fans, emo hair is sometimes singled out as an example of being a “scene kid,” who merely cop the emo look to be different or cool.

This is not meant to be a formal definition of emo hair like most terms we define on Dictionary.com, but is rather an informal word summary that hopefully touches upon the key aspects of the meaning and usage of emo hair that will help our users expand their word mastery.