or snap-back or snap back [snap-bak]

What does snapback mean?

A snapback is a type of baseball cap with a flat brim and an adjustable strap in the back that snaps together. They're a staple of international urban streetwear.

A snapback can also refer to the backwards pass at the start of a play in American football, a recovery from a previous position (think snap out of it and bounce back), as well as a retaliation or comeback.

Where does snapback come from? 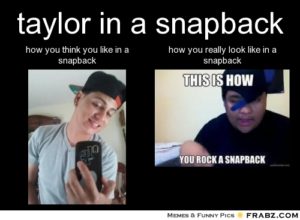 In the early 1900s, a snapback first named, in American football, a backwards pass from the center position that started play. The shorter snap eventually replaced the maneuver.

By the mid-1900s, a snapback was also naming a recovery from a previous position (think snap out of it and bounce back) as well as a retaliation or comeback. 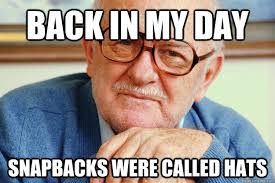 By the 1980s, the snapback hat came into style. This is a baseball cap, fitted with straps in in the back that snapped together to adjust for head size. While baseball hats with adjustable backs have been around since the late 19th century, the plastic straps with their satisfying snap weren’t invented until the early 1970s. The actual term snapback, though, wasn’t really used much until the 2000s.

Snapbacks were popularized by hip-hop artists like NWA and Mobb Deep. It’s possible this was due to an association with gang culture, where snapbacks were a convenient way to identify gang members. From the 1980s onward, snapbacks became a staple of urban streetwear.

By the early 2000s, the snapback fell out of style in favor of the fitted cap, but, as fashion is cyclical, snapbacks made a comeback for their “old-school”cool in the 2010s, also thanks to hip-hop. 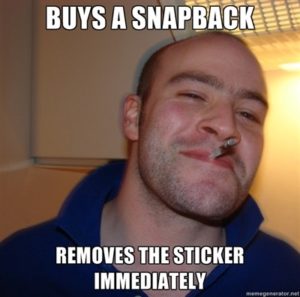 Tumblr
I just found a thrasher snapback on the ground I hope the kid who lost it can still skate okay :/
@milligram_c4d, August, 2018
As Washington’s so-called “snapback” sanctions are reinstated on Tuesday, a new EU law to shield European companies will also take effect to try to mitigate what EU officials say is their “unlawful” reach beyond U.S. borders.
Alissa de Carbonnel, Reuters, August, 2018
SEE MORE EXAMPLES 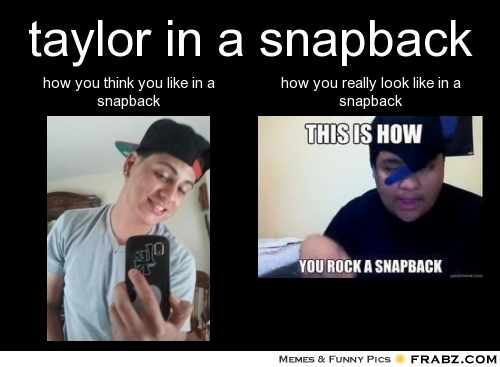 The snapback typically features a stiffer canvas material, flat brim, and plastic mesh and strap in the back—not to be confused with the dad hat, made of a softer material with a pull-tab back.

A popular brand of snapbacks come from New Era, who helped first mass-market baseball hats. To confirm their authenticity, people like to leave the shiny New Era sticker on the brim.

While snapbacks were first popularized by hip-hop artists like NWA back in the 1980s, they’ve become appropriated by white bro culture.

There’s even a whole Old Dominion country song about how good a girl looks in her snapback. And, yes, the song is called “Snapback” (2015).

The economic meaning of snapback, especially for the reinstatement of thing like sanctions, remains in use, notably in 2018 when Donald Trump reintroduced sanctions on Iran.

This is not meant to be a formal definition of snapback like most terms we define on Dictionary.com, but is rather an informal word summary that hopefully touches upon the key aspects of the meaning and usage of snapback that will help our users expand their word mastery.