Who is Bellatrix Lestrange?

Bellatrix Lestrange refers to an evil, deranged witch from J.K Rowling’s Harry Potter series and is popularly associated with a wild hairstyle and Goth-like look.

Where does Bellatrix Lestrange come from? 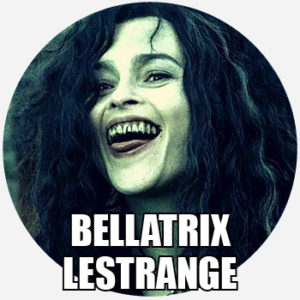 Bellatrix Lestrange first appeared in Harry Potter and the Goblet of Fire, published in 2000. A follower of the series’ main villain, Voldemort, she kills several crucial characters throughout the series.

Like many Harry Potter characters, the name Bellatrix references astronomy. Bellatrix alludes to the third-brightest star in the Orion constellation and means “female warrior” in Latin.

Bellatrix Lestrange is known for her intense loyalty to, and even obsession with, her master, Voldemort. Her name, however, has become most closely associated with her rather distinctive physical appearance and evil, unhinged behavior, particularly as depicted in the Harry Potter films.

Bellatrix Lestrange (HBC) cackling menacingly as she escapes through the demolished wall of Azkaban is basically me on the rare occasion that I get to leave the house to do something even remotely entertaining.
Tanya Marie Cole, Facebook, March 9, 2017
This is some new shit we're seeing from Aubrey Plaza. She looks like the zombie corpse of Bellatrix Lestrange in this scene.
@redrainricky, March 29, 2017
In stepped a tall, dark-haired, fair-skinned man accompanied by a Bellatrix Lestrange wannabe at his side.
Brad A. LaMar, The Megalith Union, 2013
SEE MORE EXAMPLES

In Harry Potter and the Order of the Phoenix, she’s described as a straggly-haired woman with a gaunt, skull-like face who has been ravaged by her time in the wizard prison, Azkaban. She’s frequently described as disheveled and ugly, with heavy-lidded eyes and a fanatical demeanor. Actor Helena Bonham Carter’s later portrayal of her in the Harry Potter films featured wild, teased hair, a haggard face, pale skin, and ragged black clothing that came together to form a recognizable aesthetic with a gothic flair. This look became so synonymous with the character that now people can accuse a person of “going full Bellatrix Lestrange” with an outfit, or describe a hairstyle as having “Bellatrix Lestrange vibes.”

This chick at Starbucks has straight up bellatrix lestrange hair #wild

Bellatrix Lestrange, based on her actions and personality in the Harry Potter books and films, is also used to refer to people exhibiting wild, frenzied behavior.