Who is Bon Qui Qui?

Where does Bon Qui Qui come from? 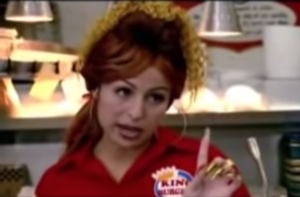 Johnson, who continued to perform standup comedy after MAD TV’s cancellation, said she thought she was done with the character after Mad TV, but her fans still wanted to see Bon Qui Qui, even coming to Johnson’s performances dressed as her.

my mother taught my daughter to hold her finger up and say "rude" like bon qui qui lord help me pic.twitter.com/T7bX9kkvSN

In 2012, Johnson recorded a rap song titled “I’m A Cut You” in character as Bon Qui Qui. The following year, Johnson played Bon Qui Qui, now working as a clothing store clerk, in an ad for fashion designer Alexander Wang. Later that year she released another song, “No Boyfren.” Both songs were included in the eight-song Bon Qui Qui album Gold Plated Dreams.

In July 2016, MAD TV was revived by the CW network. In September 2016, the show aired a sketch where Bon Qui Qui returns to her former fast-food shop as a now-famous rapper, acknowledging the character’s widespread fame outside the show.

The woman in front of me at Subway: "No I said I don't want any bread in the bread!" Bon Qui Qui would've cut her #complicatedorder
@jsmoker2k, April 25, 2017 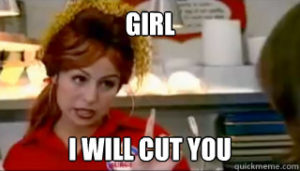 Quickmeme
SACURRRITYYYY…!!! (said in Bon Qui Qui’s voice). Tamales don’t need to be pimped out with sour cream or cheddar. They are perfect the way they are.
“16 Crimes Against Real Mexican Food That Have Gone Too Far,” BuzzFeed (March 17, 2016)
SEE MORE EXAMPLES

Alluding to the character, some refer to rude or unhelpful cashiers they encounter in real life as Bon Qui Qui. Others have used Bon Qui Qui to refer to a white person trying to act like a black person, especially women. Johnson herself is Hispanic and Native American, and has drawn sharp rebuke for the stereotypes some feel the character traffics in. The name Bon Qui Qui itself is a caricature of names associated with “ghetto” stereotypes.

Johnson has defended Bon Qui Qui, saying her “ghetto fabulous” character is based, with some degree of affection, on real people she’s met.

King Burger is hiring. You can work with Bon Qui Qui. 😂😂😂😂😂. #sakuriteee pic.twitter.com/Kz9Z5LE6gB

This is not meant to be a formal definition of Bon Qui Qui like most terms we define on Dictionary.com, but is rather an informal word summary that hopefully touches upon the key aspects of the meaning and usage of Bon Qui Qui that will help our users expand their word mastery.