Deidara is a popular and powerful ninja character from the Japanese manga and anime TV series Naruto, known for his feminine appearance and ability to make bombs.

Where does Deidara come from? 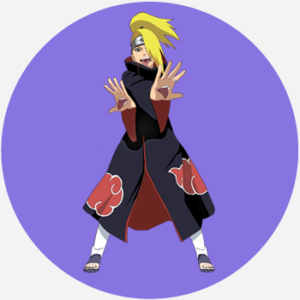 The original Naruto manga was first published in 1997 and serialized in 1999 for a 15-year run. It follows the adventures of Naruto Uzumaki, a young ninja striving for greatness and recognition. The character Deidara first appeared Chapter 247 of the manga, released in 2005 in Japanese and 2008 in English. In the anime adaptation, he debuted in Japan in 2007 and for English-speaking audiences in 2009.

Deidara is a member of the Akatsuki, a criminal organization of ninjas who seek world domination. He is a powerful and intelligent ninja with long, blonde hair and bangs, often leading him to be mistaken for or joked about as a girl. More distinctively, he has mouths on the palms of his hands, which he uses to create special bombs out of clay. Indeed, the name Deidara is related to the Japanese word for “mud.”

In Part II of the Naruto manga released between 2010–15, Deidara notably partners with Tobi, a good-natured ninja who would eventually become the central protagonist of the new series. This relationship proved popular with fans and contributed to Deidara’s popularity. Deidara eventually died fighting another main character, Sasuke.

That time Sasuke fought Deidara, and Deidara rage quit and proceeded to nuke himself to kill them both, and Sasuke had ZERO chakra left, but managed to summon Manda and used his body as a shield
@ShinOrashi, April, 2018
Sasori and Deidara may not have agreed about artistry, but their reasons for war were very much the same.
Megan Peters, ComicBook, September, 2017
Saskue may have surpassed Naruto in the initial stages of Naruto Shippuden, but Deidara sure gave him a run for his money during this fight. This battle featured Deidara at his best. He finally came prepared and seemed dead set on killing Sasuke with his explosive clay.
Brandon Lee, Crunchyroll, July, 2017
SEE MORE EXAMPLES

Deidara is mostly known to and used by fans of Naruto manga and anime, who feature him in their fan-fiction and fan-art and sometimes ship him with other characters in the series.

As a villain in Naruto, Deidara is best-known for his feminine appearance, his sense of humor, and his rapport with his partner Tobi.

Alluding to his signature bombs, his catchphrase is Art is a bang!, which fans reference in GIFs, for instance.

This is not meant to be a formal definition of Deidara like most terms we define on Dictionary.com, but is rather an informal word summary that hopefully touches upon the key aspects of the meaning and usage of Deidara that will help our users expand their word mastery.