Destiel is the ship name for the fictional relationship between Dean Winchester and Castiel from the TV show Supernatural.

Where does Destiel come from? 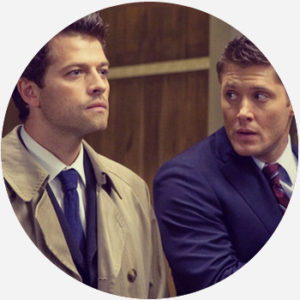 The TV show Supernatural has been running since 2005, and the demon-hunter Dean Winchester (Jensen Ackles) has been a character from the start. The angel Castiel (Misha Collins) was not introduced until 2008 in the fourth season of the show, when he saves Dean from Hell. Fans were eager to capitalize on a potential new pairing, and on the day the episode aired, a livejournal community dedicated to the pairing of the two characters surfaced online.

Destiel seems to have gone by other labels, like Dean/Castiel or DeanCas, before becoming more well-known as Destiel around 2011. (Destiel blends the first two letters of Dean with the last four letters of Castiel.) This is around the time the pairing began to grow a strong fanbase. In fact, at Comic-Con 2012, a fan asked Dean’s and Castiel’s actors what they thought about Destiel, a question which was met with thunderous applause from the audience. In the same year, the gay entertainment site AfterElton ran a poll to determine what the most popular gay ship was. Destiel got second place with an astounding 245,376 votes, clearly showing how passionate fans were. This would only continue, as in 2014, Tumblr, a stronghold for Supernatural fans, reported that Destiel was in fact the most reblogged ship of that year. And, in 2016, Destiel was the most popular ship on the massively popular fanfic website, AO3.

The creators noticed, too. In a 2014 episode (“Fan Fiction”) of the show, characters indirectly reference the pairing, with Sam, Dean’s brother, teasing that a relationship between Dean and Castiel might be called Deastiel or Samstiel.

I just woke up from a long nap and dreamed Destiel going canon next episode 😂...
@lenastiel, January, 2018
The current writer’s room is very destiel friendly (all of them), so it’s more complex than that imo.
godshipsit, Tumblr, February, 2018
Shoutout to all the destiel shippers that haven’t lost hope in seven years and still believe that somehow, it will become canon in the next episode
no-simple-answers, Tumblr, February, 2018
SEE MORE EXAMPLES

As a pairing, Destiel is confined to the Supernatural fandom. Fans of the show come together to write fanfic, draw fanart, or speculate regarding theories they have about the characters. Though the relationship may never be realized in the show itself, Destiel shippers continue to be dedicated to the pairing years after Castiel’s first introduction.

Out of frustration, fans sometimes accuse the writers of engaging in queerbaiting, or hinting at a queer romance to draw people in without intending to make it real. This is because the characters have moments in the show that contain homoerotic subtext. For example, Dean once says “Cas, not for nothing, but the last time someone looked at me like that…I got laid.”

While Misha Collins, who plays Castiel, encourages fan behavior, Jensen Ackles, who plays Dean, doesn’t share the same sentiment. In 2017, at a panel at JaxCon, Jensen stated that “Destiel doesn’t exist,” and denied that Dean could be bisexual at all.

This is not meant to be a formal definition of Destiel like most terms we define on Dictionary.com, but is rather an informal word summary that hopefully touches upon the key aspects of the meaning and usage of Destiel that will help our users expand their word mastery.