Who is Draco Malfoy?

Not Joffrey. Wrong series. Draco Malfoy is a fictional character from J.K. Rowling’s Harry Potter series. He is a rich, unpleasant bully known for his arrogance and his ties to evil wizards who practice the darks arts.

Where does Draco Malfoy come from? 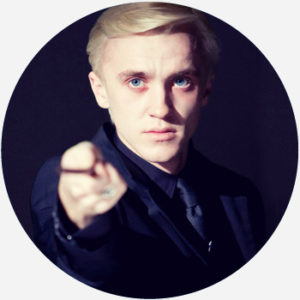 Draco Malfoy first appears in the book Harry Potter and the Philosopher’s Stone. In the stories, he’s an arrogant bully who comes from a rich family with strong ties to the series’ villain, Voldemort. Draco Malfoy is known for his belief in the superiority of “pureblood” wizards, that is, wizards who have no muggle, or non-wizard, ancestry. In the Harry Potter films, he’s played by Tom Felton.

His very name underscores his nasty personality. His first name comes from the constellation Draco, which means “dragon.” His surname is related to the French words mal (“bad”) and foi (“faith”), hence “bad faith.”

ok but why does Joffrey look like Draco Malfoy but on crack
@sara2h, April 2017 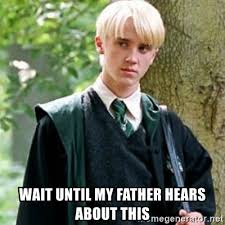 Meme Generator
Since when is Draco Malfoy representing Ukraine in the #munusaldisec??
MUNUSAL's The Globe 2017, Facebook, April 2017
This week, the Irish Independent published a fawning interview they conducted with Eric Trump—that's the one who looks like Draco Malfoy, not the one who looks like an American Psycho Halloween costume—during his recent visit to a family-owned golf resort in Ireland.
Jay Willis, “Eric Trump Sounds Exactly Like the Vapid, Naïve Oaf You Imagined He Was,” GQ, April 17, 2017
SEE MORE EXAMPLES

The first thing you might notice about Draco Malfoy is his appearance: he has white-blond hair and a pale, bony face, giving him a distinctive look that fans love, and love to hate.

Draco Malfoy gave his name to the fandom trope Draco in Leather Pants. This is a form of mischaracterization where a writer downplays the flaws of villainous or morally ambiguous characters, portraying them more sympathetically, in a way that’s inconsistent with the original. The name comes from Harry Potter fanfiction, where Draco Malfoy fans sometimes depict the character in a more positive light.

Draco’s moral alignment is also unclear. He’s unquestionably arrogant, and serves as the schoolyard rival to hero Harry Potter. Draco’s family is also associated with the main villain of the series, Voldemort. Yet some people maintain that he’s more misunderstood than villainous.

The author’s own position on this question has been ambiguous. Rowling has variously claimed that “Draco was not concealing a heart of gold under all that sneering and prejudice” and that there is “some unextinguished good at the heart of Draco,” who “learns from his mistakes.”

This is not meant to be a formal definition of Draco Malfoy like most terms we define on Dictionary.com, but is rather an informal word summary that hopefully touches upon the key aspects of the meaning and usage of Draco Malfoy that will help our users expand their word mastery.